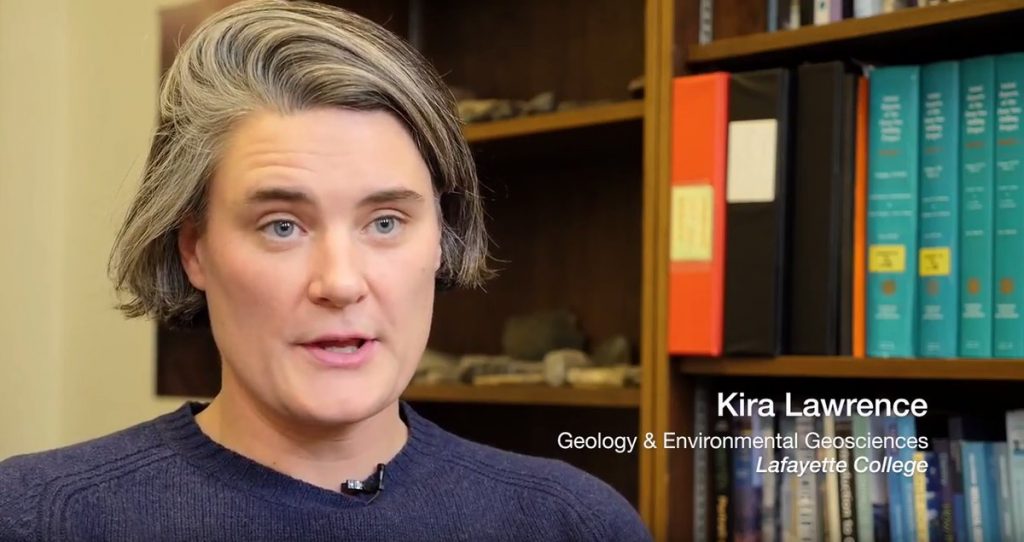 How do you see climate change impacting the lives of those in the Lehigh Valley?

Dr. Lawrence says that no one is immune to climate change. Climate change will bring more extreme weather, specifically more droughts and more rain in the Lehigh Valley. The Lehigh Valley will experience more floods, which will affect those within floodplains. While some people in the floodplains are more wealthy, there are others that do not have the same access to resources. A lot of food supply in the Lehigh Valley comes from local farms. Climate change will affect these growing seasons, which will increase prices dramatically if food becomes less accessible.

What kinds of changes do you think are going to be most prevalent in the upcoming years?

Dr. Lawrence believes that heat and water will be the most prominent in the upcoming years. While drought and lots of rain seem paradoxical, when it rains it’ll rain hard and when it’s hot it will be very hot. There may be restrictions on water in the future when these heat events occur. She believes that local municipalities will have to manage their water more closely.

What kinds of heat changes do you think are going to be most prevalent in the upcoming years?

The elderly and children are going to be most affected by the longer periods of more intense heat in the upcoming years. With shorter winters, there will be more persistent vectors of warm air that will potentially carry diseases like Zika and Lymes Disease. Zika has not yet reached the Northeast because we are still too cold, but if our temperatures are to rise in future years there is a risk that it will arrive in the Lehigh Valley.

Do you think there are specific challenges due to the geography of the Lehigh Valley?

Dr. Lawrence is more of a global climate scientist, so she hasn’t given much attention to the Lehigh Valley specifically. There will be less severe winters in the Lehigh Valley while the summers will be hotter and longer. She currently sits on the board of a thesis in the Biology Department and the student has been tracking salamanders. Due to the warm February and cold March, the salamanders spawned early and then died off due to the cold weather. She believes that other species will be affected in this way that belong to the Lehigh Valley’s ecosystem.

What can Lehigh Valley residents do to address said impacts?

Dr. Lawrence believes that in the short term local municipalities can work to mitigate the effects of climate change within their individual towns. In the long term, climate change is a losing game. As an example of ways that local municipalities can mitigate climate change on their own, when Hurricane Sandy hit Lafayette College was down for a week due to the loss of power. Instead of visiting the idea of power being buried underground to reduce these losses, the town just rebuilt what was already there. She believes that we need to move towards a more reliable and ideally renewable energy. The majority of our country becomes paralyzed when we lose electricity. At the local, state, and federal levels infrastructure can be reexamined to address these impacts.

Are you currently involved in any community efforts to address local environmental issues? Any justice focus?

Dr. Lawrence has been a key player in the forward movement of creating Lafayette’s sustainability initiative. She says that she believes that many benefits will come from this initiative as we will be combatting climate change and providing environmental education. Within her New Jersey congressional district she is part of a group that has been putting pressure on their congressman to place climate change as more of a priority. Through this group she has been working to make climate change less of a global discussion, to more of a local discussion. She hopes that her congressional district can become an example.

Dr. Kuserk is a natural scientist at Moravian who has looked into the ecological effects of climate change more so than the social science effects. He co-teaches an environmental class with a policy/social science professor which is how we linked him to the issues of climate justice in the Lehigh Valley. He said that although he was not able to answer a lot of our questions on the social aspects, we posed “interesting questions that link something happening on a global scale with trying to predict some very specific changes and instances here in the Lehigh Valley which can be challenging.”

Dr. Kuserk believes that the Lehigh Valley will potentially have longer stretches of heat waves. Cities, like Bethlehem, get hotter than other areas due to the heat island effect. Poor, often particularly minority populations are more susceptible to death by heat stroke/exhaustion in these heat events. People who will suffer the most from heat events will be those who can’t afford air conditioning.

Some solutions that Dr. Kuserk poses to the predicted changes in the Lehigh Valley is to strengthen community connections. He believes that Lehigh Valley organizations should try to help poor communities and to provide them with services to try and address the heat issue. Organizations can provide fans, support systems, and check in on the elderly and poor individuals. He is unsure of how organizations at a national level will respond to these predicted challenges as it seems unpredictable and bleak at the moment. Dr. Kuserk attended the Bethlehem City Council meeting about a climate action plan and said that the entire council, plus administration were in favor of a climate action plan.