What is environmental justice?

According to the EPA: “Environmental justice is the fair treatment and meaningful involvement of all people regardless of race, color, national origin, or income, with respect to the development, implementation, and enforcement of environmental laws, regulations, and policies”

What is climate justice?

According to the Mary Robinson Foundation: “Climate justice links human rights and development to achieve a human-centered approach, safeguarding the rights of the most vulnerable people and sharing the burdens and benefits of climate change and its impacts equitably and fairly. Climate justice is informed by science, responds to science and acknowledges the need for equitable stewardship of the world’s resources”

What is distributive justice?

Distributive environmental justice recognizes that the human right to a dignified life is fundamental, and as such, everyone has a right to a healthy and safe environment; i.e warm housing, clean drinking water, unpolluted air and food that is safe to eat

What is recognitional justice?

Recognition justice requires that policies and programs must meet the standard of fairly considering and representing the cultures, values, and situations of all affected parties

What is procedural justice?

Procedural environmental justice is usually understood to require the opportunity for “all people regardless of race, ethnicity, income, national origin or educational level” to have “meaningful involvement” in environmental decision-making. It requires that in order to uphold the former, citizens need to be informed about and involved in decision making, and enabled to identify and stop acts that breach environmental laws and cause environmental injustices 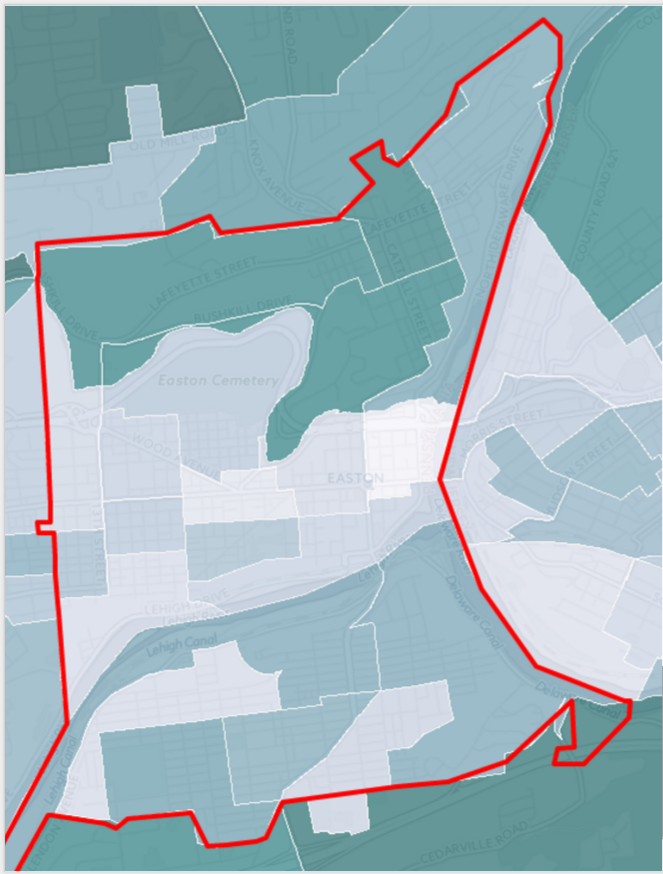 It is evident from this map that that there is a separation of various income groups geographically. Those who are better off (shown in darker green) live on College Hill. Those living in Southside are doing relatively well compared to West Ward and Downtown Communities. The Bushkill Creek and Lehigh River are the boundaries of these group of communities.

The income differences between the communities seems to be informed by their elevation. Generally, Those who are lower income are in the lowest elevation, which is more prone to flooding. Whereas, those who are of higher income are in the higher elevation areas. It is not a coincidence that the higher end of the people with income above Easton’s median live on College Hill, which is the highest elevation of the area and the steepest.

When the communities bordering the Creek and Rivers were more closely analyzed, it became evident that the risk of living in a floodplain was pretty evenly distributed among higher and lower income people. Two other things also became apparent. One is that there was a large income difference gap between those below and above Easton’s median household income. It ranged from $19,786 to $63,912! The other relates to the elevation profile above. The higher end of communities that contribute to the large gap live on a very steep hill, so very little of the area they contribute to is actually in the floodplain.

So this means that the lower income groups that live by the Creek or Rivers (where the land is not as steep from the river) live on land with higher proportions in the floodplain. So when there is flooding most of the area will become inundated meaning more costs in lives and money.

Many buildings vital to the community are located within Easton’s floodplain, meaning that they are at risk of being damaged or even destroyed during storms. While some of these buildings are well equipped to withstand such storms, while others lack these resources. Examples of some major buildings are Safe Harbor, St. Luke’s Children’s Centre, and the Easton Nursing Center. These buildings are especially important to vulnerable groups within the community, people who rely heavily on the services provided at these facilities. Coincidentally, these facilities also have the least resources allocated to flood protection, and are likely to be damaged during a flood event. In a particularly severe storm, these buildings could be debilitated, cutting off services to those in need. Damages like these disproportionately harm minority groups, since they need these services more than others.

While not commonly discussed, a major hazard associated with inland flooding is the contamination of land due to toxic flood waters. If areas in close proximity to industrial activity are flooded, chemicals can be released and transported to areas downstream. This process was evident during Hurricane Sandy in 2012, where chemicals inundated communities. Over 10.2 billion gallons of sewage was released during the hurricane, and caused millions of dollars worth of damage. Cleanup times were considerably long, but were noticeably longer in low income areas. In the Easton area, there are many chemical sources located within the floodplain, and likely more upstream. Were these areas to be flooded, damages would be surmountable. While wealthier areas along the floodplain could afford to enlist quick cleanup, lower income neighborhoods could face the same delays as areas during Sandy, leading to longer periods of exposure to harmful toxins. 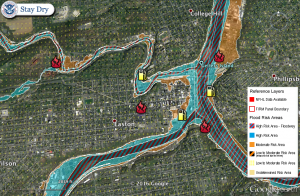 Easton is one of the few cities nationally that has created a floodplain hazard zone higher than the zone mandated by FEMA. This high degree of caution is due to the devastating floods during 2004, 2005, and 2006. These plans are extensive, and require strict and detailed rules for businesses and homeowners to follow to ensure flood preparedness. Local and state regulations are difficult to locate, and contains jargon difficult for people outside of the legal field to understand. Additionally, documents are lengthy, with over 800 pages of information For this policy to be effective towards everyone in the community, these documents must be translated in a manner that everyone can understand. Even if the information is provided, it is meaningless if it is not accessible. It is important for everyone to understand flood hazard plans because they affect how the government reacts to flood hazards. If not everyone can understand what these documents mean, than a subset of the population is precluded from participating in the community conversation on these issues, making this an issue of procedural justice.

The Hazard Mitigation plans are written in long confusing legal jargon that do not make this information accessible to a Easton citizen that does not have an educational background in policy and legal vocabulary. This compromised their right to the public process.

As mentioned before the communities that live in the floodplain have higher proportions of minority groups. Studies have shown that ethnic minorities are more likely to be less trusting of legal authorities perhaps due to past discrimination. Minority groups are also generally under-represented in local advisory councils which make or influence decisions from zoning and other local regulations. These reasons may put these communities at a disadvantage because they are not as willing to participate in the legal process. This unwillingness may also stem from a lack of education on how to participate legally in their community. Unfortunately, minority communities and lack of higher level education are connected.

Unfortunately, environmental justice discussions and terminology are not a part of everyday conversation, so not many people are familiar with it. The Nurture Nature Center has chosen to focus on educating the population as a whole on flood risks. This issue is not even on the radar of the City Government. These two authorities with a heavy presence in the community do not take a stronger role in identifying environmental justice as an issue in the community, there will be no progress . If the people of Easton are unaware of the injustices they may experience, the community will not be able to take the necessary steps to improve their conditions and seek justice. Those who are versed in environmental justice do not have a space to talk about this, which may decrease their confidence in the City’s support of marginalized groups, as well as overall disaster preparedness.

To address issues of injustice, it is vital that the Easton government take steps to mitigate one of the major sources of the problem, and work to mitigate the effects of climate change. Along with 644 major cities across the globe, Easton has committed to lowering its emissions with the UN-Sponsored Compact of Mayors Program. This program emphasizes the importance of data transparency, which in itself is an issue of recognition justice. Currently, the Nature Nurture Center is working to gather data on Easton’s greenhouse gas emissions, so that the town can work to set realistic goals for emissions reductions. A problem with climate change is that while people believe it is happening, they do not believe it is happening to them. Through the Compact of Mayors and increased knowledge about climate change and flood risk, we hope that residents of Easton will realize their critical role in the climate system, and work to take ownership of their role in the local, regional, and global environment. It also calls on local governments to take responsibility

A recent effort to partially adress this injustice, it is vital that the easton government takes steps to mitigate one of the major sources of the problem, and work to mitigate the effects of climate change. Along with 644 major cities across the globe, Easton has committed to lowering its emissions with the UN-Sponsored Compact of Mayors Program. This program emphasizes the importance of data transparency, which in itself is an issue of recognition justice. Currently, the Nature Nurture Center is working to gather data on Easton’s greenhouse gas emissions, so that the town can work to set realistic goals for emissions reductions. A problem with climate change is that while people believe it is happening, they do not believe it is happening to them. Through the Compact of Mayors and increased knowledge about climate change and flood risk, we hope that residents of easton will realize their critical role in the climate system, and work to take ownership of their role in the local, regional, and global environment. It also calls on local governments to take responsibility. While this is a step in the right direction, more must be done to bring these issues to light.