Students are not aware that Food Waste is such a large issue. All they see is the food they consume; rarely the production or disposal of it, with the exception of students who work at LaFarm, Lafayette’s off-campus sustainable farm, who see some of the production. There ought to be more transparency in how much food waste Lafayette produces, and where this food waste goes.

Students at Lafayette and Bon Appetit throw out perfectly good food while there are people in Easton going hungry. Globally, the average American family leaves 1.2 million calories uneaten, which is more than enough to feed another person (Royte, 2014). 12% of residents in Northampton County are food insecure (Hunger Coalition, 2013). In Lehigh Valley, 1 in 10 people rely on monthly visits to food banks, and 1 in 3 children are hungry (Lehigh Valley Food Policy Council). In an interview with Nancy Walters from the Easton Hunger Coalition, she noted that the 11 food pantries, 5 free meal centers, and 3 shelters in Easton speak to the severe lack of access to nutritious food faced by those in Easton without aid. Although these food centers are doing great work to remedy the issue, the demand for food is higher than they can provide. The fact that much of the uneaten food at Lafayette winds up in landfills while others go hungry is inherently unjust. 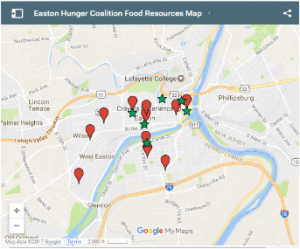 Those producing the most food waste like Lafayette students are not the ones experiencing the harms of large-scale industrial agriculture. Only impoverished people, often immigrants, experience the low-paying yet exhausting work required to produce the massive amount of food that food waste calls for. Additionally, industrial farms and concentrated animal feeding operations tend to lie near poorer and minority communities, threatening the quality of their water and air and thus posing a risk to their health. If less food were wasted, less food would need to be produced, and these injustices would be diminished.

Food Waste’s contribution to climate change makes it part of the problem that disproportionately impacts poorer, coastal communities. As climate change leads to more severe weather patterns, particularly flooding and drought, poorer communities all around the world face destruction, disease, and famine. In Easton, the lower income neighborhoods are located right along water bodies, making them particularly vulnerable to flooding. These poorer communities cannot afford to fortify themselves against the impacts of climate change. In an interview, Mary Robinson sums up climate justice very well:  http://roadtoparis.info/2015/07/29/qa-with-mary-robinson-what-is-climate-justice/

The map above shows the income distribution across Easton (“Median Income”). It shows that income generally is lower in communities along the Lehigh and Deleware River. These communities are also more prone to flooding.

Those dealing with food insecurity in Easton do not get a say in how food is managed at Lafayette. Since it is a private institution, Lafayette faces no legal obligation to collaborate with the people of Easton on the issue. However, since the food is disposed of at Chrin Inc. in Easton, it highly concerns those community members; they ought to be more involved in the discussion of food waste at Lafayette. Additionally, there are not strict enough regulations on the food waste produced by corporations like Bon Appetit. Without being held accountable for their waste production by these regulations, they will not prioritize food waste reduction if it is not of convenience to them.