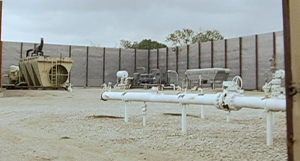 In northern Texas, there is a small town named Dish–but this was not always its name. In 2005, the town changed its name in exchange for a free 10-year access to Dish Network. While this town is known for its love of TV, it is also known for facing a large burden of environmental injustice. 10 billion cubic feet of natural gas are transported across the town each day. This gas comes from 10 natural gas lines that run through the town and/or merge within the town with pipelines. Calvin Tilman, the Mayor of Dish, was continuously told that the pipeline operations within his city were safe and that he could sit back and enjoy the free television worry-free. Yet as Tilman watched has his son’s nose start to bleed every morning, and the residents of his town become perpetually sick, he took action.

In Dish, pipelines pass and merge with each other. At those junctions, there exist large, turbine engine compressors that compress the natural gas within these pipelines. The compressors also have a release system that is designed to shoot residual chemicals high into the atmosphere, but the Mayor Tilman claims “there is a cloud [of chemicals] lingering over one of our subdivisions.”

Tilman reached out to the Texas Commission on Environmental Quality (TCEQ), asking them to conduct an air quality study of the town–but to no avail. Frustrated by the TCEQ’s blatant disregard and neglect, Tilman conducted his own study. He contracted Wolf Eagle Environmental in 2009 to test the air quality of Dish. Wolf Eagle Environmental found “amazing and very high levels of known and suspected human carcinogens and neurotoxins” in the air. The air contained several chemicals including benzene (identified by the E.P.A. as a known human carcinogen, carbon disulfide (which at high levels can be life threatening due to its central nervous system suppression) and naphthalene and dimethyl sulfide (which both cause irritation to the respiratory system, and are both flammable and combustible). Other identified chemicals, like 2-methyl pyridine and ethyl pyridine, are both still under government testing to see if they are carcinogens.

This study illustrates how current pipeline regulations do not protect the public. It also shows how poorly understood the effects of these pipelines are. These companies are operating pipelines in communities, are emitting chemicals that are not yet full studied, and are thereby showing a complete disregard they have for the people in these communities.

Another study conducted later that year by Earthworks, polled the area for statistical information on the citizens of Dish. They asked a part of the population various health related and odor related questions, in order to build an understanding of how the chemicals are affecting residents of the town. They found that 28 out of the 31 people interviewed smelled an unsettling odor once or twice a day. 19% of those people reported that they were sick. 61% of those 19% reported signs of known health effects of the chemicals detected in the air by Wolf Eagle Environmental. A total of 71% of the participants had respiratory alignments. Earthworks’ study received a lot of criticism because it was a nonscientific study, but the information it produced was nevertheless telling. The chemicals that pipelines emit do affect the people who live nearby. These chemicals are not being handled correctly or safely, and are rather capable of negatively affecting local residents.

The pipelines in Dish, Texas still exist to this day. No action has been taken to protect the families that are affected by the emitted chemicals. Nothing in this town has changed since the aforementioned studies have been conducted, aside from the fact that the town’s free subscription to the Dish Network has run out…