Ever heard a picture is worth a thousand words?  Social scientists agree that the arts are great stimulators and thought provokers.  People lead busy lives, issues like flooding do not affect us everyday, so they are not at the forefront of people’s minds.  Flooding is still a very prevalent issue and should continue to be talked about, especially with the Da Vinci Science Center project on the horizon.  Art has been used to bring awareness towards flooding before, here are some examples:

In the early decades of Rome, the Tiber River, which the city resides on, would only flood every 50-100 years. By the late Middle Ages, construction along the river resulted in two major bottlenecks that increased flooding significantly, especially into the Jewish Ghetto.  Floods would now occur multiple times a year during the wet season.  Without modern drainage and flood control, the city had catastrophic floods.  Plaques were hung on major building in memory of the events and to documenting the height of the water.  The earliest known plaque dates, February 2, 1230. 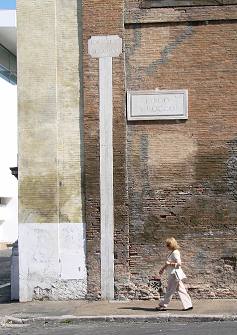 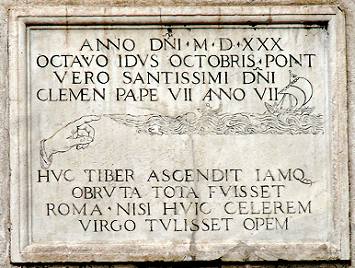 UP TO HERE GREW THE TIBER AND ROME WOULD HAVE ALREADY BEEN COMPLETELY FLOODED, HAD THE VIRGIN NOT PERFORMED HERE HER SWIFT ACTION- October 8, 1530

High Water Line Bristol September, 2014
Artist Eve Mosher conducted a public artwork stretching 32 miles along the river and harbor areas of Bristol, in the United Kingdom. The city has historically been very prone to flooding with this trend only expecting to get worst. The piece is a chalked outline of the high water mark scientists believe Bristol will be susceptible to in future flooding. The project was conducted with the help of residents living within the drawn flood line, and aims to stimulate residents to engage with flooding and climate change conservations. 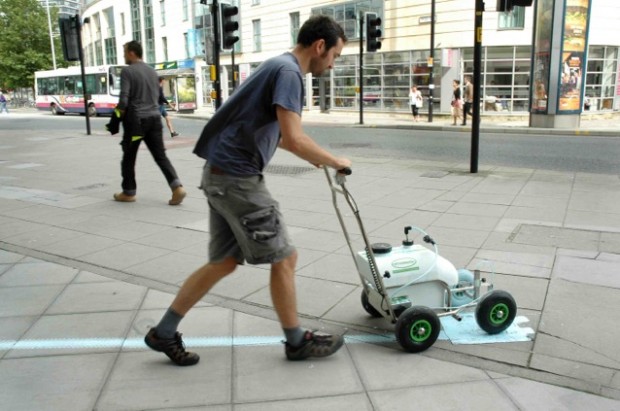 Dr. Alan Marshall of Mahidol University, Thailand, conducted a project to imagine what 100 cities across the world would look like in an ecofriendly utopia in the year 2121.  After much research and surveying, scenarios were illustrated and then given narratives; the whole project is now bound in a book, Ecotopia 2121.  One of the cities chosen was Accra, the capital of Ghana.  Accra has disastrous floods on a yearly basis, and will only get worst with climate change.  The people of Ghana are also subjected to unregulated construction and dumping around the waterways, which further contributes to the flooding devastation.  As a poor, developing nation, Ghana hardly contributes to global warming, but is strongly affected by the ramifications of it.  In Marshall’s narrative, the natives retreat to the trees, building an entire community above the flood line. 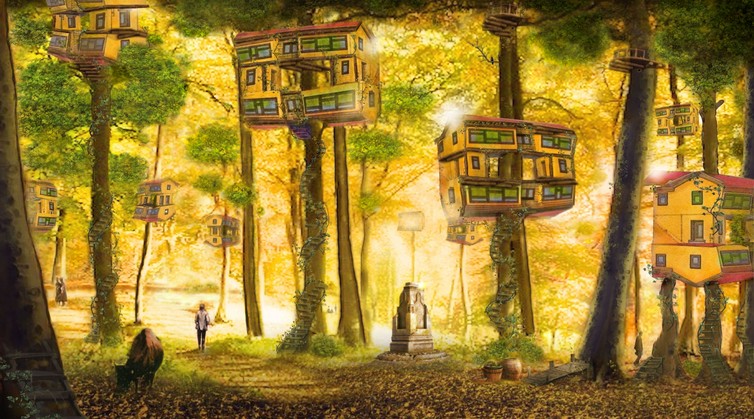 Swoon, a Brooklyn street artist, made a 2014 exhibit in the Brooklyn Museum addressing the loss of people’s homelands due to climate change and rising sea levels.  The pieces are rafts, with the idea that portions of cities have broken away from the mainland and floated out to sea.  She was inspired by the devastating flooding brought on to New York thanks to Hurricane Sandy, which led her to think of the millions of people around the world vulnerable to increased climate-induced flooding.  Swoon believes its part of being an artist to stimulate mental and emotional processing of the public on such critical issues, since the concepts are so large and out there for the average citizen to grasp 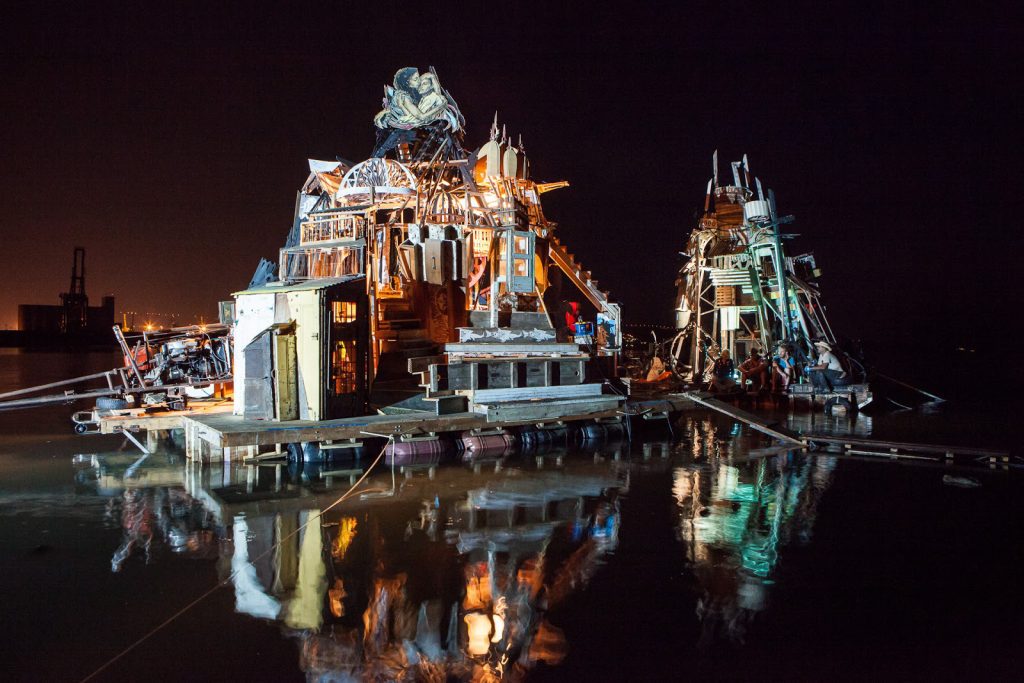 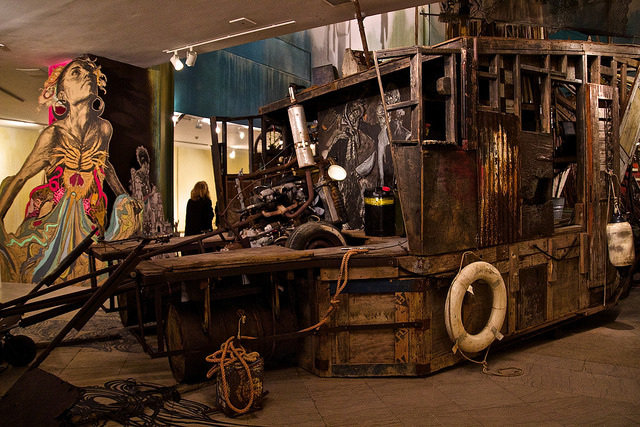 Constructed in 2011, the Flood Level Marker resides on the banks of the Boulder Creek in Boulder, Colorado.  While not on the coast, Boulder has many high risk floods from mountain run off after storms.  The “Big Thompson Flood” of 1976, equivalent to what is believed to be a 1000-year flood, initially hit Boulder with fourteen feet of water.  The Flood Level Marker stands 18 feet tall and marks the 50, 100, and 500-year flood levels, along with the Big Thompson level.  The Marker is a reminder towards the power of floods and that they cannot be fought, just merely adapted to.  The height of The Flood Level Marker diminishes the idea that humans are bigger than any flooding. 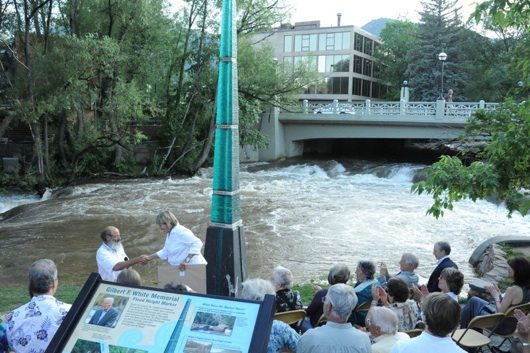 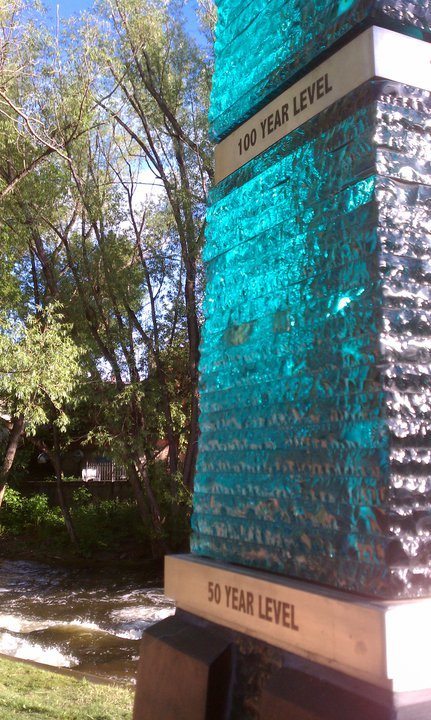 Easton has its own flood-art installment, constructed by Stacy Levy.  The Bushkill Curtain hangs above the Bushkill Creek near the Lafayette College Arts Campus.  The stringed buoys clearly depict the creek’s water level, flowing direction, and intensity.  Levy likes that it’s dynamic and interacts with nature, she believes this increases the chance a passer-byer will stop to look and think about it.  The curtain doubles as a flood signal as it clearly shows if the creek has reversed in direction (meaning the Delaware River is flooding into it), and just how high the water is compared to its normal height. 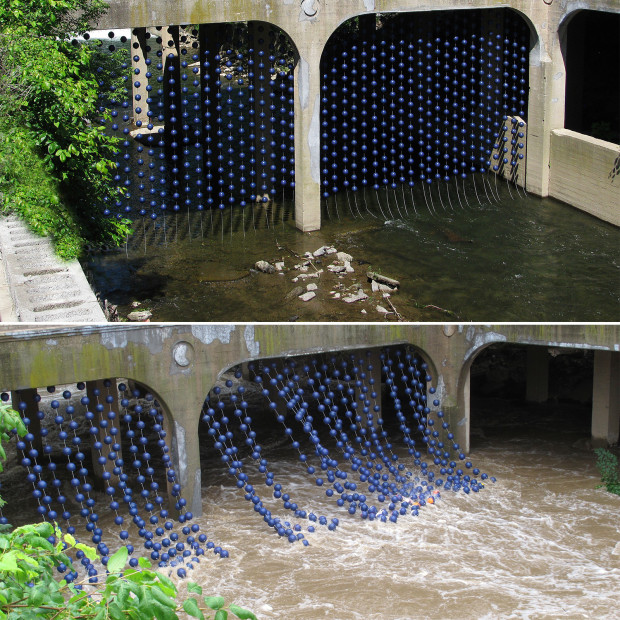