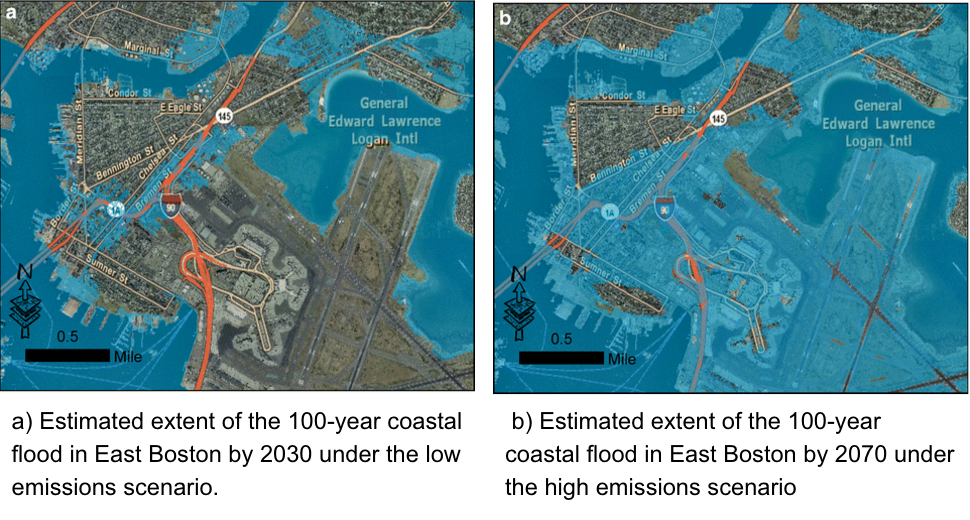 A 2012 UMASS Boston study explored the possible future impacts of increased coastal flooding due to sea level rise and the potential adaptation responses of two urban, environmental justice communities (Everett and East Boston) in the metropolitan Boston area of Massachusetts. The study found that neither targeted population had an adaptation perspective or knowledge of any resources that could assist them in the challenge of flooding, nor do they feel included in the planning processes within their communities. However, after being engaged with the study, residents from both communities were eager to learn more and to become more active within their communities in regard to climate change adaption. Workshops were held with the residents where the researchers found how effective images and maps were at conveying their message. The study also found the importance of understanding current cultural knowledge/values prior to planning adaption strategies, for a solution that makes sense to one party may be rejected by another for exterior reasons. Finally, engaging all residents from the beginning of the planning process is essential in developing trust and consensus necessary for moving projects forward.

Voluntary and open to the public, Easton EAC is a local governmental chapter made to identify, research, and make recommendations to the city on environmental issues.  They are responsible for making recommendations for land-use and reviewing land development plans.  The Easton EAC is to recommend and promote plans and programs on conservation, city clean-ups, and other general environmental subjects to both the city and the wider Easton community.  This chapter is at the forefront of environmental organizations that can have a direct impact on the City of Easton; citizens and Lafayette College students should volunteer and engage with the EAC to grow environmentalism within the community.

A dynamic center for community learning about local environmental risks, the NNC staff uses a blend of science, art and dialogue programs to get the community talking and thinking critically about the local environment.  Science programs, film screenings, community discussions and art shows, among other programs are housed here to engage citizens about timely and important environmental issues of interest to the community.  NNC uses these art and science exhibits, as well as other forum programs and educational events, to invite local residents and decision-makers into an ongoing dialogue about building community resiliency through environmentally-sound decision-making.

A global company with an office in Easton, Vertex is an engineering firm with focuses on environmental and construction services.  In 2016 Engineering News-Record named Vertex #160 in the world for Environmental Firms, and #31 in the world for Construction Management.  This company is a huge local asset for Easton, especially with their planning of the Da Vinci Science Center.  Their environmental services include advising in due diligence, making environmental claims, and performing clean-ups.  This is in addition to their green building habits for their constructions.

An entirely volunteer and nonprofit organization, PRO, situated across the Delaware River from Easton, works to preserve the character and environment of two river front counties in New Jersey.  PRO works to revitalize land and discourages citizens/the state from inappropriate land use of open spaces, such as lands subject to flooding.  The organization works to promote and educate the community on the arts and the environment through its programs.

How Can We Help?

Without a doubt, college campuses are seen as instigators for social, political, and ideological change. From college campuses have spurred environmental and civil rights movements, and have been the forefront of groundbreaking discoveries. This is why, every time a student says they’re too powerless to make a change, it’s society’s responsibility to slap them in the face. We’ve outlined Easton’s problems of flooding, and here are some real world ways to help. One way is through academic research. While this isn’t an exhaustive list of every gap in our knowledge, it’s a start. Who knows, maybe this will inspire a project of your own?

Encouraging Groundwater Infiltration :Effective stormwater implementation: As cities expand and develop, they create impervious surfaces. As fields are replaced with parking lots more water runs off into streams, creating a higher flood risk. This issue specifically highlights injustice because the people developing land upstream are increasing the flood risk for those downstream; the beneficiaries aren’t the ones at risk here. A simple way that Easton can reduce its flood risk is by investing in stormwater management systems upstream. Cities have implemented various technologies in their hometowns, but what would make sense for easton?

Cheap & Flood Friendly Architecture: New commercial buildings along the floodplain in easton have implemented designs to minimize damages incurred during floods. Similar designs for homes have not been implemented, in part because of a lack of new construction, and because homeowners cannot afford it. So the question is, how can we design affordable housing that also protects against flood damage? Similarly, what are cheap ways that homes can be retrofitted against flood damage?

Using Chemical Signatures to Trace Contaminants : A problem that occurs frequently during floods is the inundation of contaminated water into homes, groundwater, and the soil. If someone could analyze the chemical fingerprint of various contaminant sources in the Lehigh Valley, then they would be able to identify the responsible polluter after a flood.

Environmental Justice Hazard Mapping: New technologies such as GIS have revolutionized the way that people spatially envision issues. While Easton has a floodplain map that uses risk of damage as a defining factor, an environmental justice map would use a different framework. This new hazard map would use ability to cope with and pay for disasters. An “adaptability” metric would be measured by income, race, and gender in addition to risk. Some interesting patterns might emerge.

Understanding the Social Mechanisms of Injustice

Property Values and Emerging Environmental Risk: The relationship between risk and property value: Properties along the floodplain in Easton exhibit a bimodal distribution. On one hand, homes along the river are scenic, and many are historic, attracting a wealthier buyer. In stark contrast, high risk areas can also attract low income populations. A student interested in economics could research the property trends of easton in the past 50 years. Then, they could create a model for how this trend will continue if flooding becomes more frequent

The Social Drivers of Disaster Action/Inaction: Flooding is not an issue that people typically associate with climate change. Very few people are likely aware that climate change will lead to an increase in flooding in Easton. If people were more aware, would they be more likely to act? Additionally, as the time after a disaster increases, are people less likely to act?