Different addictions tend to alter the function of different neurotransmitters.  There is a lot of overlap, particularly among dopamine and the reward pathways in the brain, but some addictions act on completely different neural mechanisms.  Some of these pathways and their associated addictions are listed in the table below.

Some of the brain regions that are impacted by these neurotransmitters and addictions are highlighted below as well.

Because most of these addictions are related to dopamine function, it’s important to note how dopamine acts on various regions of the brain as well as how dopamine pathways interact with other neurotransmitters to cause addiction.

The Dopamine pathway and its interaction with Serotonin and Noradrenaline

Reinforcement in the Dopamine Pathway

Addicts often become conditioned to associate certain conditions, such as objects or locations that are associated with their addiction to the addiction itself. This learned adaptation is due to activation of the mesolimbic dopaminergic system and thus the amygdala during the feeling of engaging in the addictive behavior while also observing the specific context (2).

The mesolimbic dopamine pathway, which is triggered by rewarding behaviors, is regularly activated by addictions. To cope with the excessive activation that these behaviors or substances induce, the body desensitizes itself. Essentially, the brain recognizes that it’s being overstimulated, so it adapts in such a way that stronger signals are now required. Thus, the dopamine levels triggered by the addiction become the baseline. This means that the behavior or substance is now necessary just for the addict to feel normal. If the addict cuts themself off, then their dopamine levels will fall beneath their newly-defined baseline levels. This deficit is what causes the negative feelings of withdrawal (2). 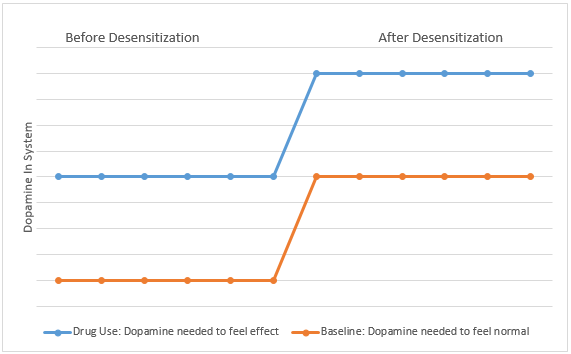 A Qualitative Demonstration of Desensitization and Withdrawal.

Interactions between Dopamine and both GABA and Serotonin

It’s important to note that these neurotransmitter systems often interact with each other, creating a greater effect than their individual mechanisms do on their own. For example, chronic exposure to alcohol impairs the dopaminergic and GABAergic systems that control the addict’s desire to keep drinking. This mechanism, related to the central amygdala, is regulated by both neurotransmitters rather than either one individually (2).
Alcohol also causes a reduction of activity in the GABAergic system that controls the dopamine circuit in the ventral tegmental area, causing an increase in dopamine levels that leads to an increase in alcohol consumption. It’s notable that a simultaneous increase in serotonin levels will decrease alcohol consumption. This shows how many neurotransmitters are simultaneously involved in addiction, particularly how serotonin and dopamine have opposite effects regarding substance abuse. (2).