Farming is a completely different world in the Fall. Instead of the odd jobs being the last thing we get to, almost everything we do is what we would do when we had extra time during the summer: spreading straw and wood chips, cleaning up the shed, organizing the tomato trellises, and all that sort of work.

Still, this Fall has been a very good time for getting LaFFCo fully operational. Every week we’ve had people come out to help, which has been fun as well as educational for everyone. I’ve certainly gotten plenty of experience working with new people who need a different amount of explanations for certain jobs, which has been super useful. Also the extra help has allowed us to have quite the set up for events leading up to Thanksgiving!

First of all, Sarah and some of us from LaFFCo are presenting at 1pm on Saturday for this year’s Our Beloved Community, which is a great opportunity for us to tell prospective students about the importance of food and agriculture and what Lafayette is doing to help.

More toward Thanksgiving, on this coming Thursday the 19th, LaFarm is holding a market in Farinon for students and faculty from 11-4 (more info here) and then on Friday LaFFCo is heading out to the farm to harvest the last of the food for our Thanksgiving Potluck happening on that Sunday the 22nd (more info for that here) which will be a great way to wrap up the agricultural season with all our members! I look forward to everything that’s coming up.

In addition, I’ve heard a bit about a big story in the upcoming Alumni magazine, more on that when it gets released… 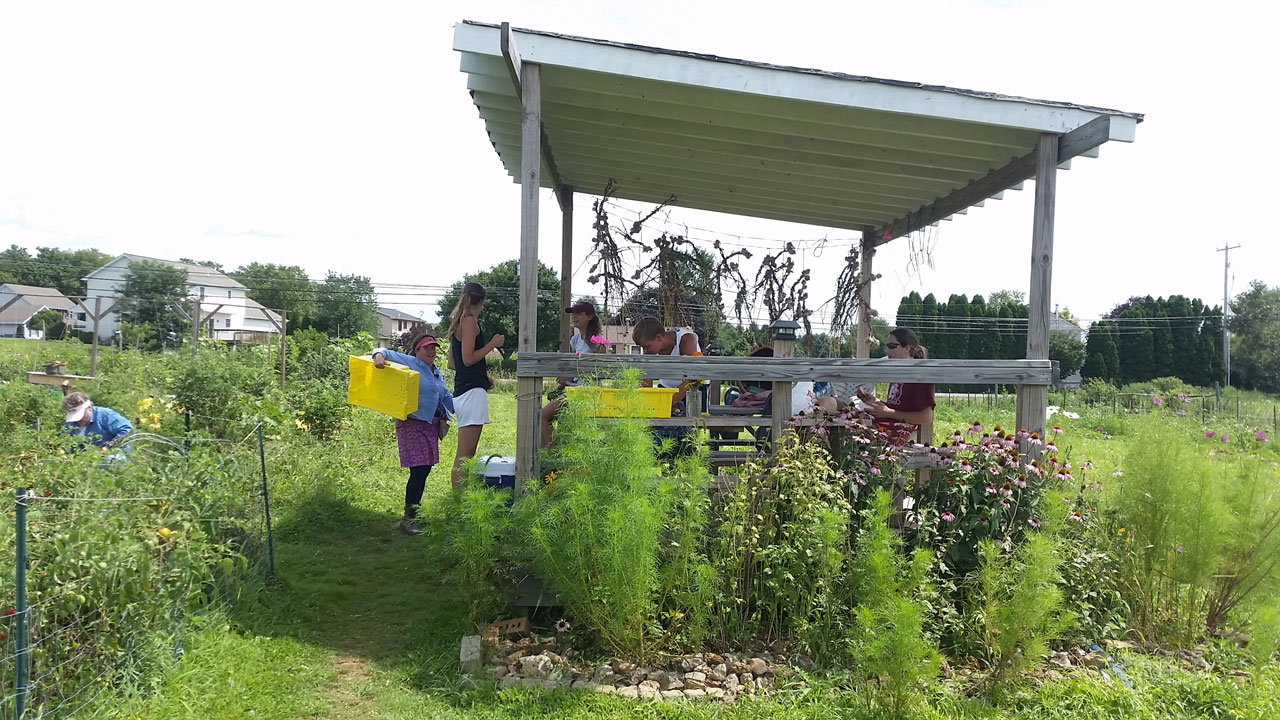 It’s tough to be a student organization when there are no students. Despite our challenging summer work, we are but a minority of whom we hope will volunteer this year. Fortunately, the Involvement Fair (The event in which First-Year students join 10 more clubs than they have time for) is soon, and we hope they visit us and sign up and volunteer at the Farm.

Speaking of volunteering, we here at LaFFCo are searching for a select few brave knights* to assist us in a task most perilous. We have found ourselves beset upon by a creature most foul, with vast casualties on the Brassicas. For all ye who brave treacherous low bushes and ankle-high meadows, contact myself or Joe for Wednesday Sorties into the terrifying unknown. If we brave the deep jungles, we may just find the fabled cabbages hidden within. Let us join forces and be a WWOLFpack (Working Wednesdays on LaFarm). It’s a pun on the word wolfpack, see? Because wolves hunt in packs. I’ll stop now.

In other news, the LaFarm market is up for the semester (Fall 2015)! Stop by on Tuesday afternoons and stock up for all you need to combat the dangerous, fluffy, adorable monsters.

Also, have you heard of the Vegetables in the Community program that has been running? You can check it out here

That’s all for now. Stay tuned for more LaFFCo news through the Fall Semester.

The first part of this post was written on Wednesday, July 1st. In the immediate aftermath of the storm, there was significant concern regarding plant health. In fact, it was suggested that we plow over some of the damaged plants and start afresh. Instead, as we are not a for-profit business (but instead a unique education facility. Also, a farm), we can experiment with the regrowth of the plants. Part two chronicles this a week later, some plants came out better than others. The second part of this post was written on Monday, July 6th.

On this past Tuesday, a severe storm and tornado warning reached the Lehigh Valley. Hail was a  contributor and strong winds and torrential rainfall toppled many plants and supports. Indeed, Forks Township (next-door to the Farm) was particularly hard hit with fallen power lines. It is unsurprising our farm saw damage as well. Fortunately, there were no injuries reported in the heavily-impacted towns to the immediate north and west of our location.

Straight-line winds (indication of a microburst, and that no tornadoes touched down) is the monster of the day. The wind topped out at an estimated 80 mph in nearby Whitehall Township and approached those speeds at the farm. 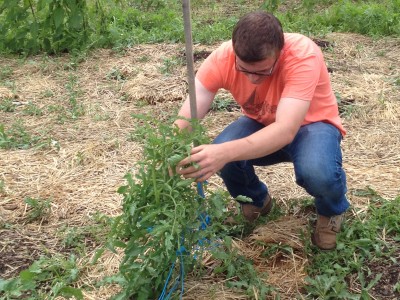 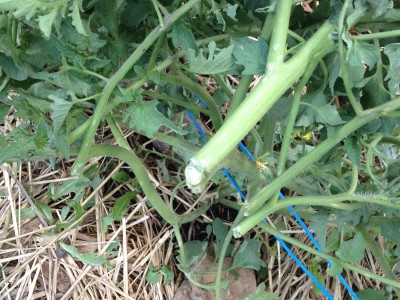 Here’s a general rundown of the damage to the farm: 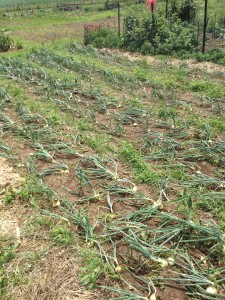 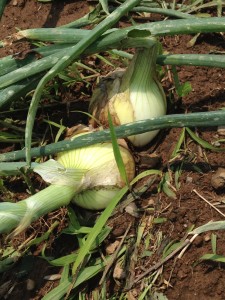 Close-up of the onions. Note the broken stalks, which is deadly to many plants. 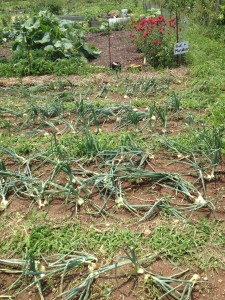 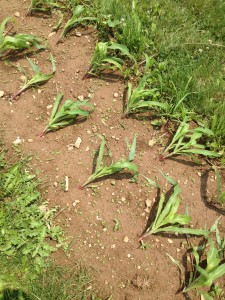 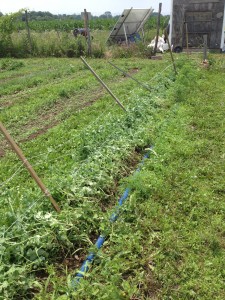 Peas and their supporting stakes 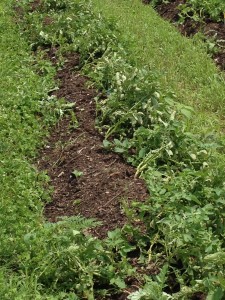 Potatoes in their compost mounds

The corn is in an awkward spot, being completely sideways. The last few weeks of anticipated peas were unable to be harvested.  The potatoes are also questionable. Even the chain sculpture (pictured right) was dragged several feet by the wind.

Now, last post, I indicated that I would be having less serious posts for the blog (also cabbages), but this storm is a serious issue for the farm. Beyond the damage to our own farm, there are implications for our food loop and community and discussions on the larger picture. Joe will be getting into that on the other side of the blog.

The onions, as I indicated, will see an early harvest. Perhaps unsurprisingly, the peas were chopped down and mowed over. Most of the potatoes will recover, but the one’s we deemed unlikely to survive were harvested and served at a 4th of July Picnic. The corn, fortunately, popped right back up. All in all, many of our root vegetables (garlic, onions, potatoes) saw an early harvest, while our other plants (such as tomatoes, summer squash, asparagus) is likely to hold on well*. 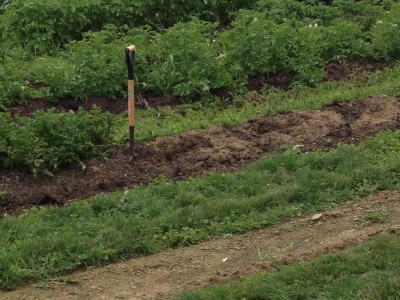 Early harvest for the hardest-hit potatoes 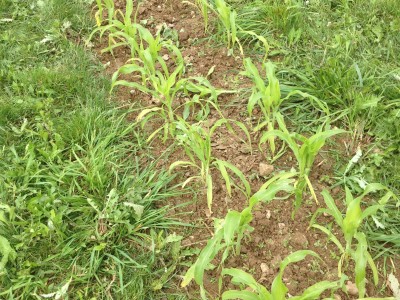 The same peaches and cream corn as the previous picture, separated by a few days

*Many of the tomato plants (and peppers, eggplant, and other fruits) will see a delayed harvest. The unripe fruits were cut from the plants to have the plant grow more leaves and stems, instead of investing the nutrients into the fruits.

Locusts: Or their grasshopper cousins, anyway.

Thunderstorm and Hail: See above

Blight: Fortunately not on us, but the tomatoes suffer. 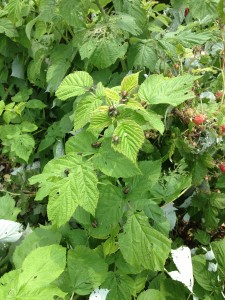 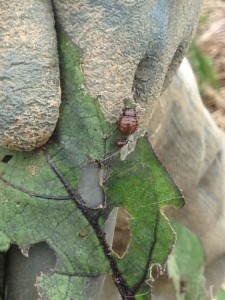 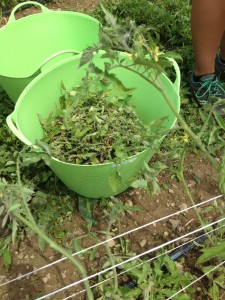 Hello good friends, family, and strangers, and welcome to the LaFFCo blog at LaFarm! I am Fletcher, and I shall be your guide for today. As this is a first post, I find it prudent to give introductions, and let the more traditional bloggy posts come next week.

Perhaps the most significant introduction to make is LaFFCo as an organization. On the first tier, we are a club at Lafayette College. The initialism LaFFCo stands for Lafayette Food and Farm Cooperative. As of this writing, we have existed for approximately half a year and we’re already thinking about the coming school year.

On the second tier, we endeavor to be the liaison between the greater student body and LaFarm. We’re passionate about food and the environment (Our board also affiliates with SEES and LEAP, among other organizations). More than our own farm, however, we support sustainable practices for the people that work across the globe, the food they grow, and the land and water resources that go into it.

The third and final tier is our mission statement, plastered in large block letters across the metaphorical walls: “The Food and Farm Club helps members develop a sense of ecological citizenship through action regarding food and agriculture choices and education in the Lafayette and Easton community, while taking advantage of Lafayette’s multifaceted food loop and working with the various actors involved in that loop.”

As I mentioned, my name is Fletcher, and I am proud to be a founding board member. The rest of the board includes Joe, Club President and author of the other side of the blog, Alexa, Peter, and Molly.

Please look forward to future bloggery in a less serious nature than Joe’s blog. While we all give our blood, sweat, and tears (actually, very little blood and tears, just lots of hard work), I believe important to make this challenging work emotionally satisfying instead of a chore. Needless to say, please look forward for bad puns and references to silliness next to straightforward and honest recounting of the week’s events.

Here’s a sneak peak at the next post, regarding cabbages, Monty Python, and Indiana Jones. Come back next time for it! Adventurers seek fabled cabbages, but in the heart of the jungle, they might just find more than they are prepared to handle.

Ready to grow your own veggies?

Lafayette College community members can sign up for a community garden plot here!

The post-harvest season of rest and renewal have arrived at LaFarm. If you want to get involved in our Lafayette Food and Farm Cooperative, or help out at the Farm, contact our LaFarm Manager at edmondss@lafayette.edu.

Leap into Action with LEAP and LaFFCo:

LaFFCo
LaFFCo is the Laffayette Food and Farm Cooperative, the student organization for students interested in food and farming issues. Check out our facebook group here.

Join, lead or follow as LEAP improves sustainability all over campus. for more info on activities and meetings check out LEAP on Facebook Y'all!