Every year snow covers the majority of the United States for some period of time. Solar panels scattered around the northern regions of the United States and Canada lose millions of dollars worth of energy every year while covered with snow. The proposed snow melting device and process control would go a long way to solving this problem, making solar panels in the northern regions of the United States and Canada much more profitable and economical. The device would detect a significant weight of snow on the solar panels, which would then trigger a heater in the panel to melt the bottom layer of the snow – the interface between the panel and the snow. This allows for the snow to slide off from the solar panel due to potential energy caused by the downwards gravitational force. The thermal energy comes from a battery reserve included specifically for this snow-melting process, which is charged during hours of low energy demand until it is fully charged. Once cleared, the panel would resume capturing incoming sunlight and generating electricity, that would normally be prevented by blockage.

Initial calculations are based on a variety of assumptions, showing that the savings over the course of the lifespan of an average domestic solar panel would be around $100. It should be noted that the target audience of this snow melting system is mainly solar companies selling to residential households (because most industrial solar farms have rotating mechanisms that could prevent snow accumulation), specifically, in the Northern United States and Canada where snowfall is commonplace and regularly expected.

The process of heating the surface of the solar panel to melt snow-panel interface needs to be controlled so that the panel does not produce unnecessary heat when there is no snow to melt, or when it would not benefit to melt the snow (such as at nighttime). This would lead to wasted energy and therefore a waste of money.

The presence of a significant weight of snow resting on the solar panel signals heat from the specific battery reserve to be released to melt the snow at the panel interface. The desired “set-point” for the amount of snow, in this case the “controlled variable“, would be zero. Any weight measurement revealing a positive deviation from zero snow would trigger the need for a decision (amount of heat needed or duration of heating) and ultimately an action (generating heat) in order to bring the controlled variable to its desired level (zero).  The amount of heat generated to melt the snow should not exceed the required amount, so the response should exhibit critically damped behavior.

There are many factors to consider when building a model for how and when the solar panel should react to the presence of snow cover. These factors include the temperature of the outside air (directly impacting snow density and the chemical potential of solid water), the amount and density of the falling snow (dependent on atmospheric humidity and abundance of clouds per snowfall), the angle of the roof (or “pitch”), the time of day, the amount of cloud cover blocking sunlight, or a detected weight other than snow. The pitch of the roof would not change for the system – it would be considered initially in the programming of the heater response (a more angled roof would require less heat to make the snow slide off) and would remain constant after the purchase and sizing of the equipment. The time of day should be coupled with the system software to avoid heating at an inappropriate time, when no sunlight would be absorbed as a result of heating.

Disturbance variables in this scenario would be the weather, which is not always predictable or pre-determined like aforementioned factors, or a weight presence on top of the solar panel other than snow.

The weight issue could potentially be solved by adding multiple weight sensors, one in each corner for a total of 4, to assess if the weight is evenly distributed (as snow would be) or if it is a false alarm and either something fell on the solar panel, is resting against the solar panel, or an animal landed on the panel (which would most likely be temporary and not have a large effect on wasted heat energy). If the panel begins heating when no snow is present, this would defeat the purpose of having a system with the purpose of saving energy by maximizing the absorption of available sunlight, leading to a counter-intentional waste in energy.

If the panel heats snow during the day but it’s raining or cloudy, this could lead to inefficiencies because the snow may naturally melt under these circumstances and an accelerated melting process via added heat would not absorb sunlight in the cloudy conditions. Another disturbance to the system would be the duration and inconsistency of each snowfall. The panel might heat a significant weight of snow off of the panel, only for it to be blocked once more moments later. The system could be set to only initiate the process once the weight obstructing the panel is constant, but consecutive snowfalls within less than a day of each other might turn out to become cost defective. There also exists a limit to the amount of weight the underlying pressure sensor could detect before maximizing. Wind also becomes a weather-disturbance to the process and a heavy gust of air could solve the problem without utilizing any energy from the panel itself, in which case heating would become useless.

It is important to monitor and quantify these factors to optimize the performance of the Snow Melt system. 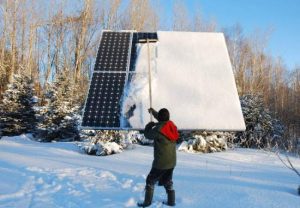 Cleaning your solar panels manually is not only tiring and cumbersome (and dangerous on rooftops), but is also potentially damaging to the solar panels and could void the warranty. Instead, consider investing in our cutting edge SnowMelt technology, which will take care of snow accumulation autonomously.

States that average above 25 inches of snow per year and that have at least 250,000 households include Vermont, Maine, New Jersey, Pennsylvania, Massachusetts, New York, Michigan, Alaska, Colorado, and New Hampshire – all of which are prime candidates to integrate SnowMelt systems into their solar panel arrays. Residential applications are the primary beneficiaries of this upgrade, as rooftop snow removal can be dangerous and the solar panels are stationary, which leads to an accumulation of precipitation. However, industrial solar farms could also pursue SnowMelt technology to reduce maintenance costs and associated risks therein. Solar panels implementing the SnowMelt technology would be incrementally more expensive according to the metrics below, therefore, larger industrial solar farms would be more financially viable candidates as they have higher spending budgets and larger energy surpluses that could be purposed towards purchasing these high end SnowMelt panels (which would reap savings in the long term.

The attachment below shows the calculations that were used to find that the average solar panel in Denver Colorado would save around $100 throughout it’s lifespan. With the largest solar farm in Colorado containing 500,000 panels, implementing Snowmelt could save them $48 million over the next 20 years. 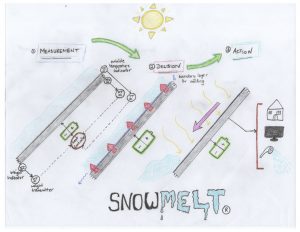 The figure above displays the basic process diagram that would be used for Snowmelt.

Additional improvements to the debut of our SnowMelt 2017 technology could be explored, such as a hydrophobic coating to the solar panel that would prevent low-density snow from sticking to the panel. This coating would also help repel melted high-density snow, as well as frost/ice, and make it slip off the panel easier. This coating would have to be tested for a potential detrimental impact on the solar panel’s light absorption and energy conversion efficiency.

A potential vibration fail-safe system is also available for research and implementation in the event of extensive frost or ice that becomes troublesome and counter-cost effective for the SnowMelt technology.

The battery storage source for the heat to melt the snow could also be optimized and improved, as battery technology in the context of solar panels is a work-in progress and a popular area for research currently. The cost and efficiency of batteries are dependent on many factors such as size, maximum energy capacity, energy leakage, and the lifetime capacity to carry a charge. The ideal battery for this system would be small enough to be implemented to the solar panel (either internally or externally), with a lifetime equal, or close to, that of the solar panel.

Pattern recognition software might also be implemented into the snow-melting process in order to predict and foresee the need for melting and energy would only be absorbed into the reserves preemptively as to minimize a waste in electricity. This feed-forward response would be constantly changing according to data recorded observing the activation and individual trials of the SnowMelt technology. Data to be observed and recorded from each individual execution of the process for continuous analysis would be time of day, air temperature, heat used, energy gained, and weight relieved off of the panel.

The solar panel could potentially also be connected to meteorological data for the most accurate prediction of environmental variables. This would allow the panel to specifically plan each of its melting processes before the snow has even reached the panel and use close to exactly the amount of energy needed to maximize sun absorption. This would take into account air temperature, amount of sunlight, and duration of snowfall.

Extensive snow-melting tests should be performed at different roof angles and outdoor temperatures to assess how accurate the calculated energy requirement ranges are, while also providing data of reproducibility of the melting technology.