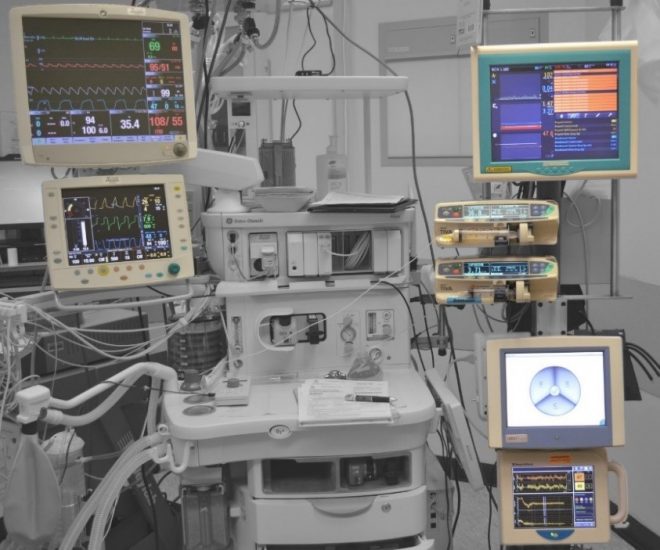 Did you ever wonder in your wildest possible imagination that one day an automated anesthetic machine can sedate a patient without the need for human anesthesiologists? No, right…neither did us! When we first heard about it, it sounded a mere fantasy but to our surprise it is something that scientists are currently working on, in order to make it a reality and a dream come true. We believe just as technology changed automobile factories, this potential automation of drug delivery procedure will one day transform hospitals.

Think of this machine as a sort of humanoid anesthesiologist that thinks like an anesthesiologist, analyses biological information and constantly adapts its own behavior. However, anesthesia is tricky. It’s often compared to flying a plane – keeping a patient hovering in just the right plane of consciousness. Surgeons don’t want patients writhing on the table. And patients don’t want to be aware of the operation. The article discusses the potential, efficacy and feasibility of an automated closed-loop controlled Propofol drug delivery system for clinical surgery.

Anesthesia, a temporary induced loss of sensation or awareness, plays an important role in clinical operations because it allows painless performance of medical procedure that would otherwise cause intolerable pain to an unanesthetized patient. General anesthesia works by altering the flow of sodium molecules into the nerve cells (neurons) through the cell membrane, which then restricts the generation of nerve impulses. The brain becomes unconscious, does not store memories and does not register pain impulses from other areas of the body as a result of the lack of generation of the nerve impulses. Propofol, a commonly administered intravenous general anesthetic agent, is one of the short-acting anesthesia drug that decreases level of consciousness and lack of memory. It is used for starting and maintenance of general anesthesia because the recovery from Propofol is more rapid and clear.

Normally Propofol is administered by an anesthesiologist via an Intravenous line, however a more novel and precise technique- automated closed-loop controlled Propofol delivery system can be used in order to administer the amount of Propofol injection and to control the depth of anesthesia instead of the anesthesiologist manually administering the Propofol intravenous drug which leads to time delay in reading the value and comprehending the change in monitored value as well as human error in reading, judging and altering the drug dosage. Automated anesthesia drug delivery system involves the continuous administration of a combination of drugs with frequent adjustments to maintain normal cardio respiratory vital signs during surgical stimulation. Recent advances in nervous system monitoring technology have yielded a new set of real time sensors to capture the effect of these drugs on the patient’s state. As a result, automated feedback control of anesthetic drug delivery to a pre-defined set point can be a means for providing the patient with a titration specifically adjusted to his or her needs. Moreover, automated closed-loop controlled Propofol delivery system has the potential to decrease drug dosage and facilitate post-operative recovery while increasing patient safety and decreasing the workload of the anesthesiologist.

The performance of Propofol drug delivery depends upon the reliability of the controlled variables. While delivering the drug to the patient, there must be some kind of a continuous monitoring system to ensure that the patients are getting the right amount of sedation. The control variables include the measurement of the heart rate, blood pressure, respiration and oxygen level in the blood. The control variables mentioned vary from person to person based upon age, gender, body weight, general health, medical conditions and activity levels.  In addition to these direct measures, surrogate measures like Spontaneous and Evoked-Electro-Encephalogram (EEG) should also be considered, which can scan the patient’s brain waves to make sure the sedation is adequate in order to keep the patient in a period of moderate sedation-un aware but still responsive. EEG has been proven to give accurate measure of the drug effect as it assesses the effect of anesthetic drugs on the central nervous system. The delivery of intravenous anesthetic drugs using the apparent relationship between the depth of anesthesia and the changes in EEG increases accuracy. Recently, Bispectral Index (BIS), a derived variable of the EGG that provides a measure of the consistency of phase and power relationships among the various frequencies of EGG, has emerged as a convenient and versatile tool to titrate hypnotic agents and to reduce drug consumption, therefore allowing faster recovery while avoiding side effects such as hemodynamic instability or awareness. BIS is a dimensionless number scaled from 100 to 0, with 100 representing an awake electroencephalogram and 0 representing electrical silence.  It describes the complex EGG pattern as a single variable. It was initially calculated to give the best correlation with the probability of movement to surgical incision but then it has been further developed using a database of EGG data collected with different anesthetic drugs. Because it is a single composite measure monitored continuously and reported to be related to the hypnotic component of the anesthetic state superior to other measures, it has been used to control depth of hypnosis automatically.

Unsedated individuals typically have BIS greater than 97. With progressive drug-induced sedation, BIS number declines. During surgery, the appropriate time to start an operation has the signal of stable hemodynamics and no movement or response. The BIS value is determined experimentally, which should be less than 60 but greater than 45. This allows reduced anesthetic dosing, emergence and recovery times. 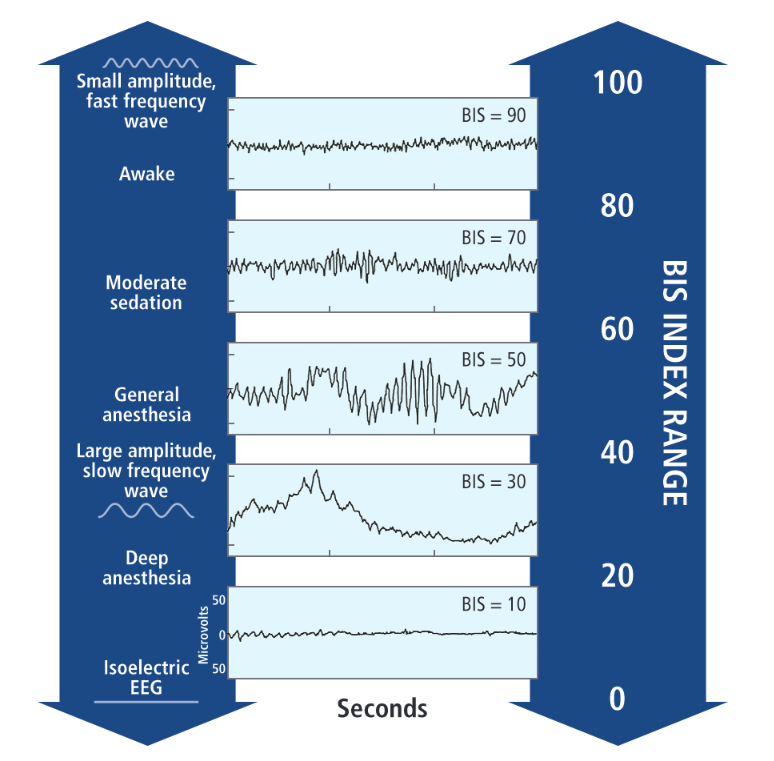 Figure 2. BIS index is scaled to correlate with important clinical end points during the administration of Propofol

The control of BIS number is critical to the Propofol delivery process as it represents the behavior of central nervous system directly. However, the BIS monitoring can be significantly influenced as an indicator of anesthetic hypnotic effect during the operation. Four key areas include the influence of muscle tone (EMG) from the forehead muscles; electrical and mechanical artifacts from medical devices; abnormal EEG states; and certain anesthetic agents and adjuvants—which can all lead to elevated BIS values. As a result, ideally BIS monitoring information should be integrated with other available monitoring information and patient assessment, such as blood pressure and heart rate etc.

Unintended intraoperative awareness may occur in 0.1% to 0.2% of adult patients undergoing general anesthesia. Inadequate anesthetic effect results from an insufficient anesthetic dose, disruption of anesthetic delivery, or potentially inherent anesthetic resistance. Because of the potential for psychological injury, clinicians should consider this evidence in developing patient-specific strategies in order to avoid awareness.

The use of an automated closed-loop controlled Propofol delivery system using BIS monitoring reduces primary anesthetic use as well as emergence and recovery time. Experiment that utilized Propofol reveals that 13% to 23% less hypnotic drug was used and 35% to 40% quicker wake up was obtained, which significantly reduces the cost of clinic. Incidence of intraoperative awareness and recall can be decreased by strictly controlling the BIS value between 45 to 60 and avoiding value greater than 60. The evidence of the significant benefit is shown by the fact that only two patients in the 4,945 treated patients reported awareness, with a 77% reduction comparing to prior study.

The manipulated variable for an automated feedback controlled propofol delivery system will be the amount of propofol injected. The amount of anesthesia injected is always the only variable that can be controlled in a closed loop drug delivery system and it makes practical sense since modern technology allows us to directly change the input amount.

There are two ways of Propofol intravenous infusion: manually controlled (MCI) where the anesthetist makes each change to the infusion rate or target-controlled (TCI) where the anesthetist sets a target blood or effect-site concentration and the computerized infusion device makes the necessary changes to the infusion rate. A TCI pump in combination with the BIS monitoring system would be the most suitable choice for Propofol intravenous infusion to control the controlled variables.

Generally, the BIS value will be set to 50 for a feedback loop. A TCI pump is used to titrate the drug delivery to the indicator of depth of anesthesia. A model-based adaptive controller will be designed to steer the feedback system. The controller will contain an algorithm to translate the difference between measured BIS value and set point to a particular action of the TCI pump.

The individual anesthetics produce specific pharmacological actions so the unifying concept of “depth of anesthesia” may need to be revised. When looking at the dataset collected in their experiment, patients without awareness had BIS value ranged from 50 to 80. As a result, it becomes necessary to operate in an individualized range.

Potential sources of disturbance include the sudden jump of BIS value caused by the influence of muscle tone (EMG) from the forehead muscles; electrical and mechanical artifacts from medical devices; abnormal EEG states; and certain anesthetic agents and adjuvants. These unmeasurable disturbances which are not considered in the controller synthesis urge the presence of an anesthesiologist to counteract them.

A feedback system will be appropriate for the Propofol delivery due to the characteristics of the TCI pump. Feedback system represents a situation in which two (or more) dynamical systems are connected together in such that each system influences the other and their dynamics are thus strongly coupled. A feedback system is a common and powerful tool when designing a control system. Basic components of a feedback control system are the control variable, the set point for this variable, which is the chosen target value specified by the user and the controller to control the actuator. Propofol delivery feedback system contains a sensor that monitors the BIS value, a controller that compares the measured value to the set point and sends the decision to the actuator-pump which has an effect on different body functions. The TCI pump reacts accordingly by increasing or decreasing the amount of input, which is the amount of Propofol infusion. Success of feedback controllers for anesthesia largely depends on the sensors that measure the different components of anesthesia. 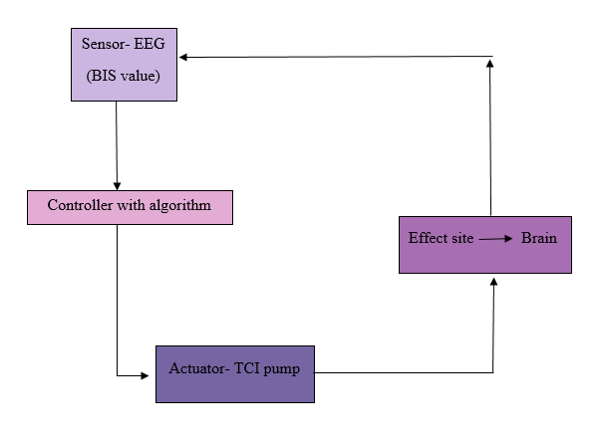 A closed-loop system senses the level of output, feedbacks this information, compares it to a set point that defines the desired output level and uses the difference to push the output towards the set point. Because of more frequent sampling of the control variable and more frequent changes to the rate of drug delivery than with manually delivered anaesthesia, the stability of the control variable may be greater. At the same time, the dose delivered is customized to meet the exact requirements of each patient, thereby overcoming the problems of inter-individual differences and differing levels of surgical stimulation.

C.Frankel Todd, “We are convinced the machine can do better than human anesthesiologista”, May 15, 2015, The Washington Post