Being an ACLS Burkhardt Fellow means you have to choose a library to host you. And I’m fortunate enough to get to call the American Antiquarian Society in Worcester, MA my home during my fellowship. The AAS has the amenities a great research library can offer: a world-class collection of primary sources, matched by world-class staff, a gorgeous reading room under a domed roof, a constant stream of smart people coming through to make use of the collections, and spaces to retreat to gather one’s thoughts and notes. The one drawback for me: I can’t take pens into the library (for obvious reasons). 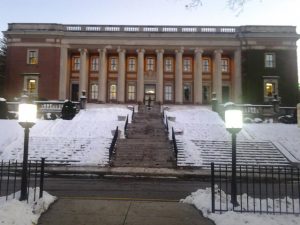 Since I’ve drafted my current book project longhand using fountain pens, this has sent me on a tour of local libraries, several of which are quite attractive places to explore and work in. But one has captured my heart, and I want to share some thoughts on it as part of my processing of this annus mirabilis: Dinand Library at the College of the Holy Cross.

The college is perched on a steep hillside south of downtown Worcester, offering great views of the area year-round (and, I expect, some lessons in the prudence of walking cautiously and buying crampons during the winter). The library has a towering neoclassical facade, a majestic central reading room, and an array of study areas, lounges, nooks, and crannies in which to settle oneself for a reading and/or writing session. It’s popular with the students, both the chatty and non-chatty zones, and I have also gotten to enjoy writing on the patio that’s kind of on part of the roof (describing architecture in buildings built into the side of a hill makes me aware of my limited technical vocabulary). 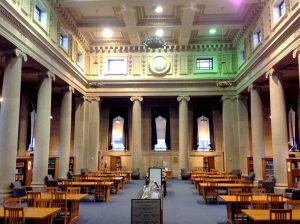 But the most unexpected pleasure of Dinand—books! Ok, yes, dear reader, that should be the least unexpected element in a library, a word that derives from the Latin for, well, book. But wait, I say, these aren’t just any books. Take, for instance, this view of a shelf of Longfellow’s works: 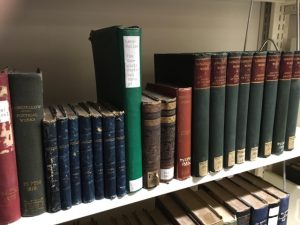 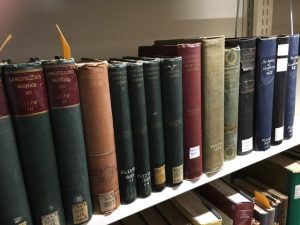 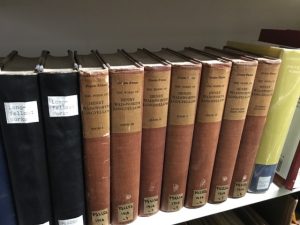 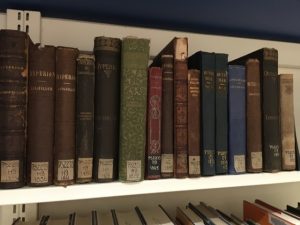 That’s about half of what’s on the shelves—first editions, second and third and eighth editions, virtually every major collection of Henry Wadsworth Longfellow’s works from the nineteenth and early twentieth centuries, plus individual titles galore. And it’s like this for many 19th-century writers. There’s even a pristine copy of Samuel Longfellow’s posthumous Hymns and Verses (1894), a book that has never had many readers anywhere, but for this nerdy Longfellow reader it was a precious gem shining in the midst of a horde. It’s almost enough to make one start quoting Angl0-Saxon poetry (don’t worry, I won’t—this time). 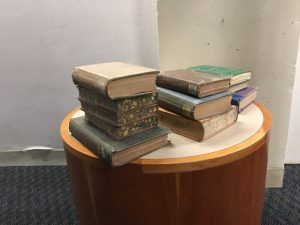 This ain’t all the Cowper—this is just what I pulled off the shelf over about ten minutes of browsing.

I had gone to Dinand for the first time because it was Labor Day and nearly all the other libraries in Worcester were closed. There was a very scarce hymnbook in Special Collections I wanted to see, and that visit included a lovely conversation with SpecColl director and Archivist Mark Savolis. It was afterward, in wandering the stacks, that I realized how much pre-1900 richness there was here.

One other example: part of my current project involves looking at the ways in which significant amounts of hymnody were incorporated (or not) into the collected works of famous poets, including people like James Montgomery and Felicia Hemans. William Cowper was one of my central figures for this part of the study, and what should I find in Dinand but an entire shelf of 19th-century editions of Cowper’s works, most of which I hadn’t seen before—and I’d seen a good number by this time. In a few minutes I had a much clearer sense than I’d had before of when Cowper’s hymns, such as “O for a closer walk with God” and “God moves in a mysterious way,” tended to be included in collections of his poetry.

I share all this as a professed bibliophile (and a bibliophilic professor), but also to make a point about the ongoing scholarly value of keeping collections like Dinand’s intact and accessible. The kinds of books I handled in the stacks at Dinand are what an increasing number of librarians and scholars are referring to as the medium rare—these are the books not quite scarce enough, old enough, or valuable (read: money) enough to warrant housing in a rare books collection, which Dinand also has. And yet the date and fragility of these books make them vulnerable to be considered outdated, deadweight, wasted space, a liability rather than an asset to their institution. These include old collected works, early (perhaps not first) editions, old textbooks, gift books, and other material that tends to have the most relevance within its original moment, or in a relationship forged by the giving or assigning of a book. Long out of interpersonal circulation and classroom requirements, these books are being increasingly deaccessioned—they simply get sold or thrown out to make room for more books or, more likely, non-storage uses of library space. 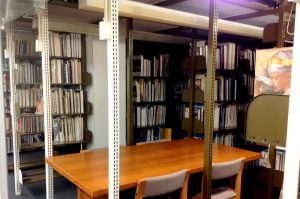 A study area in Dinand Library—surrounded by new and medium rare books.

One of the ways scholars have begun working to save such collections is by calling attention to them, through scholarly as well as more broadly public channels. Andrew Stauffer of the University of Virginia, for instance, has taken his Book Traces project on the road to dozens of colleges and universities in the US, crowdsources traces of use in medium rare books that reside in the open stacks of those institutions’ libraries. Old notes, signatures, slips of paper, and more have popped up, as volunteer searchers—students, librarians, faculty, staff, and community members—have been amazed at what these often-overlooked books contain. Kyle Roberts of Loyola University Chicago has leveraged the social media platform Flickr to crowdsource his Jesuit Libraries Provenance Project, an effort to document the provenance of books currently and formerly in the collections of Jesuit college libraries in the US. This blog post is a humbler attempt to increase awareness of the remarkable materials that sit, waiting to be discovered, on college libraries shelves, hidden in plain sight.

While not every book can always be saved, the more we know what we have, the better decisions we can make about how to care for it, use it, and celebrate it. This tribute to my feast among the medium rare in Dinand is a very small step toward progress on this issue.