It’s been a while since I’ve written in this space, and I’m going to take the opportunity to talk about something I just did last week and have wanted to do for years: I took a course at Rare Book School on the University of Virginia’s campus. This is a favorite summer (and occasionally other seasons, too) activity among bibliography-minding folks, and after learning from a friend on the American Antiquarian Society staff that the standard practice there is to share a written report describing what professional development you got from your course, I thought I’d offer my own version of that report here.

While courses are now hosted at Yale, Penn, the Folger Library in DC, and other venues, the heart of RBS has been in Charlottesville for twenty-five years, and the courses generally happen within spitting distance of the iconic Jeffersonian rotunda. My course, on the theory and practice of scholarly editing, was one of five courses running that week, on topics ranging from the history of the book to descriptive bibliography to illustration and paper-making techniques. The schedule is packed: six hours of class a day (plus homework, often), much milling and conversing, evening events including lectures, films, and even a “Rare Book Night” when Charlottesville’s used and antiquarian book dealers keep their doors open late for RBS folks to bolster their own collections. On the last point, I struck out—it seems hymnbooks aren’t considered sellable among the antiquarians of Charlottesville—but I did have some great Virginia whiskey with a classmate. (NB: Virginia distillers are a LOT better at bourbon and rye than they are at Scotch.) 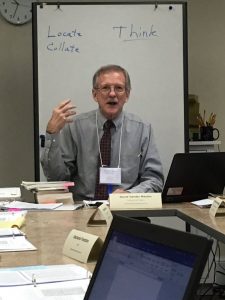 DVM inviting us to consider the course themes.

But if Rare Book Night didn’t deliver, the rest of the week sure did. Our course instructor, David Vander Meulen, is one of the quiet giants in his field, a world expert on Alexander Pope and longtime editor of Studies in Bibliography, a journal he inherited from his colleague, the legendary editor Fredson Bowers. RBS staff refer to him as DVM, which proved to me his rock-star status (it calls to mind Michael Tilson Thomas, the San Francisco Symphony’s director and a real showman, going by MTT among his staff). We spent the week learning the many decisions, principles, problems, and techniques involved in how to prepare a new edition of a text. This was something of a “how the sausage gets made” kind of experience, as the course made me much more aware of how many things can go wrong as an editor gathers materials, compares them, interprets and transcribes them, annotates them, and prepares them for publication (pro tip: proofread EVERYTHING more than once!). Few tasks get you as close to an author’s work, or a popular version of a hymn text, as trying to sort out where the commas need to go and which spelling is the right one.

In terms of my own work, I knew already that hymns would be difficult texts to edit, but coming out of the week, I have a much healthier respect for how little I can actually accomplish in comparing variants of the text. A popular hymn in the eighteenth and nineteenth centuries could appear in hundreds, even thousands of collections, with many of those collections running into multiple editions (possibly dozens), and each collection potentially making changes to the text, either intentionally or otherwise. The best practice is to compare all textual variants when editing a text, but there’s no way I can do that with popular hymns. The good news is that I left the week with a workable initial game plan—spurred by a required presentation at the end of the course—for editing a classroom anthology of a hundred significant hymn texts from the eighteenth and nineteenth centuries. So now I’ve got a new project! 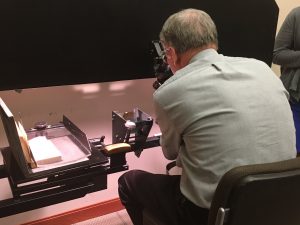 DVM showing us how it’s done at the U. of Virginia’s Hinman Collator. Don’t try this at home…unless you’re DVM, who has one in his garage. No joke.

That’s the big outcome from the week. But there were plenty of other takeaways, too. I learned to use the fabled Hinman Collator, a six-foot-tall metal workstation that uses lights, mirrors, and a set of binoculars to superimpose pages from two copies of a book on top of each other. This allows a scholar to detect changes in typesetting, from differences in wording and punctuation to small changes in type alignment that hint at a book’s being at least partially reset at some point in the production process—clues that can add up to a much fuller textual history of a literary work than unaided perusal would be likely to reveal. I also got some practice with the Lindstrand Comparator, a desktop version of the Hinman. Actually, the principle is a bit different; while the Hinman flashes the user’s view quickly between one book and another (which induces migraines in some people), the Lindstrand uses mirrors to focus the left eye on one book and the right eye on the other. This setup makes any difference in text between the two books seem to float above the page, as our stereoscopic vision can’t reconcile the difference into a single image. It’s pretty cool.

Yet while all the hipsters are no doubt drooling over this post by now, the Millennially-minded may be wondering: has the computer age done ANYTHING to the world of editing? It absolutely has. UVA is the home not only of the great bibliographic tools of the 20th century but one of the oldest and largest digital humanities centers in the country, and that heady blend has led to, among other things, the development of Juxta. This is a collation program that compares not images of texts but text files: take an OCR (optical character recognition)-enhanced scan, a typed transcription, or an existing text file, put it into Juxta along with other related files, and choose the type of visualized report you want to display all the variants, down to the smallest jot and tittle, between your files. There’s no more efficient way to compare, say, 45 versions of a hymn text against each other. Lafayette doesn’t have a Hinman or a Lindstrand, but Juxta and I are definitely getting to know one another over the coming year.

And one of the best benefits of RBS is, of course, the fact that there are a dynamic group of smart, engaged people doing everything together. I made some great new friends, caught up with old friends, learned about corners of the academy I hadn’t encountered before (Roman graffiti! early Jesuit poetry! Cuban translation practices!). The director of RBS, Michael Suarez, S.J., closes each course week with the admonition that what we have learned is not for our own advantage or gain, but so that we can carry our new knowledge, and the love of bibliography, out into the world we inhabit. With a new editing project, plus a range of great new ideas for introducing students to seeing books and texts as they’ve never seen them before, I’m ready to get sharing.

And in closing, I voice my thanks to the Academic Research Committee at Lafayette, who provided funds so I could have the privilege of this remarkable learning experience. This gift will keep on giving, I assure you.