As my previous posts on the embodied life of the mind suggest, it’s been a bit tough getting work done lately. With my dominant hand out of commission for several weeks yet to come, typing has been very slow; I’m learning to work with dictation software, which also has its delays. One of the most difficult things about not having my right hand available is not being able to write things down as I think of them: no notes, no outlines, no visualizations of plans to guide what is supposed to come out of my head. I have been able to read, albeit without a pencil in hand, but even that has been slowed down by a move to Massachusetts for a year of study and writing. Because of that, I have decided to postpone the rest of my Poetic Faith seminar this summer. I will return to it in the coming months, but as I’ve cleared my shelves for the move north, I want to include one last brief installment that focuses on two little gems on the topic lectio divina.

What is lectio divina? It literally translates as “divine reading,” but that doesn’t clearly capture what this ancient monastic practice involves. It is a meditative form of reading, focused on sacred text and beginning with the assumption that the text is a word from God. It does not deal in information or scholarship, but in relationship; among the metaphors used to describe the practice over the centuries are eating, chewing, and above all, listening. There are versions of lectio divina in ancient Jewish practice, in Buddhist and Sufi practices, indeed among most of the world’s peoples of the book. Its classic expression in Christianity comes from the Rule of St. Benedict, the fifth century founder of western monasticism. In recent decades the practice has received renewed attention, not least from Pope Benedict XVI urging the faithful to practice Lexia Divina in their personal devotions. At its root, this reading as a form of dialogue, one in which the person listens to God through the text and response back with love and acceptance. It is a radical, counter-cultural practice, as much today as in the deserts of Egypt or the Italy of the late Roman empire.

The first book on lectio I’d like to discuss is an edited collection difficult to find the United States. Salvatore Palimolle edited Like the Deer That Yearns: Listening to the Word and Prayer in Italian in 1987, and the English translation appeared in 1990 from a small British publisher. The book has a strong pastoral focus it was clearly intended mainly for clergy to read, but it includes rich reflections on the history of lectio, particularly in biblical and ancient Jewish contexts. Perhaps most significant is Palimolle’s discussion of the lectio that creates the nation of Israel before their God in Exodus 24. At the base of Mount Sinai, after giving the law to Moses, God directs his prophet to read the law before the assembled people. When the reading concludes, the people assent to it, promising to obey all that God commands. Moses then sprinkles the prepared blood of sacrificed animals on the people as a sign of the sealed covenant they have made with God. Thus defined reading in the nation of Israel was a liturgical act, built on a personal relationship with God as well as a ritual relationship with God and each other. Reading is meant here to be a transformative act; it is literally a matter of life and death. 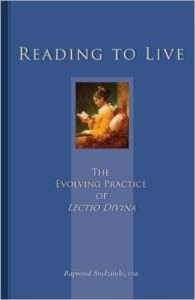 Like the Deer That Yearns offers a much higher claim for the power of reading then most modern literacy advocates would dare to make, in large part because reading amounts not to an escape in lectio but a way into a larger interpersonal reality. Remarkably, an iconic image of reading as escape—Fragonard’s The Reader—graces the cover of the second book, Raymond Studzinski’s Reading to Live: The Evolving Practice of Lectio Divina. Studzinski is not afraid to use secular sources for his discussion of divine reading; he takes his title from a quotation by Gustav Flaubert, an author rarely held up as a religious exemplar. I think this freedom for Studzinski comes from the fact that the secular (if we understand that turned to mean “not religious”) is not the first or worst enemy of lectio. Rather, he makes a compelling case for the rise of Scholasticism and the European university as the forces that diverted the church from its devotional reading practices.

The desire to systematize knowledge, particularly theology, meant that new relationships with biblical, exegetical, and doctrinal texts were in order after the year 1000. Studzinski argues that lectio requires an embodied text as well as an embodied reader; that is, lectio dwells on the individual page. What scholastic reading did, in his view, was to lift the text from the page into new units of consumption and organization: the verse, the paragraph, the argument, the whole work. Only in the more conservative monasteries did lectio remain a vital practice.

At the end of his book, Studzinski argues that the recovery of lectio has led to a revitalization of lay and clergy spirituality, as evidenced by Benedict XVI’s advocating the practice of lectio among the faithful. Living in what we often referred to as an information age, we can engage in lectio to recover our relationship to the Word—both the speaking-creating God and the human language that is among our divine gifts.

What I take from reading these two small books together is that reading at its most powerful is both deeply personal and fundamentally communal. As Donald Marshall has argued, Stanley Fish’s notion of interpretive communities names more than it means to about the role of the group in the life of literate faith. Where Fish means only to put the brakes on the relativism of reader-response theory, Marshall sees a reader empowered by a loving, practicing communion of believers who meet the text as they meet each other and teach each other how to love the Word. This is a deep mystery, and one that I plan to revisit as I read several classics of reader-response criticism this fall. In the meantime, I hope that we all can find space to slow down, look at the page, and invite the words found there into ourselves as honored guests.

Note: thanks to the Emmanuel D’Alzon Library at Assumption College in Worcester, Massachusetts, where I found an extra copy of Reading to Live as well as some quiet space in which to dictate this blog post.