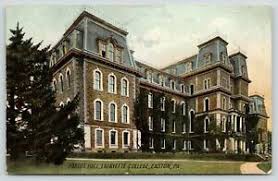 EASTON – It was a dark and stormy Halloween night in Easton, Pennsylvania.

While the rest of the Lafayette College student body was busy consuming candy and preparing for a night of festivities, my journalism class had different plans for the evening. On the night of Thursday, October 31, we ventured up to the fifth floor of Pardee Hall, Lafayette’s oldest building. Our mission? To find ghosts.

First constructed in 1872, Pardee Hall has been burned down twice–once in 1872 due to an accidental chemical fire during chemistry class, and again in 1897.

The second time, the fire was no accident. After an angry philosophy professor didn’t receive tenure, he responded by setting the building ablaze. Some say Professor George Stephens’ spirit never left the fifth floor, the location of his former office. Throughout the years, stories of otherworldly activity in Pardee Hall have arisen, with particular suspicion regarding the mysterious fifth floor.

Today, students take classes in the first four floors of Pardee, but the fifth floor has remained empty for years. Once filled with classrooms and offices, the top floor is now nothing more than an attic, uninhabited save for a family of bats that makes its home among the dust and cobwebs.

Few students have ventured to the Pardee attic; some aren’t even aware of its existence. The only way to access the eerie space is through a locked door on the floor below.

As we waited on the fourth floor for a Public Safety officer to unlock the door for us, we could hear the wind howling outside. A sign on the door warned us of bats. It was the perfect setting for a spooky Halloween special.

Finally, the officer arrived with a fat keyring clinking on his hip. He unlocked the door and led us inside.

“Are you gonna go find some bats?” he asked jovially.

Personally, bats were the least of my worries. I was a bit more concerned about finding the spirit of a certain angry philosophy professor lurking in the cobwebby corners of the attic.

I half jokingly asked the officer–a heavyset man with a salt and pepper mustache–if he would stay in the attic with us; I was a bit disappointed when he politely declined.

My heart quickened as we ascended the two flights of stairs that led us to the dimly lit attic.

Yellow fluorescent lights lit the wide open space. Myriad particles of dust were suspended in the air, illuminated in the beams of light. The floor hummed with machines, whose small pinpricks of blinking red and green lights intermittently broke through the shadows.

We made our way into a smaller, unlit room. Only a threadbare shaft of light from the fluorescent fixtures filtered into this smaller space, so we pulled out our phone flashlights to stave off the shadows. Our flashlights cast intersecting beams of light as we cautiously explored the cobwebby corners of the attic.

In the middle of the room sat three crumbling cardboard boxes filled to bursting with old books, each one coated in a light film of dust. I pull out the first book I saw and read the cover: “Film in the Third Reich.” I sifted through the contents of each box, only to reveal more German titles. If there was a ghost, I hope he knew how to read German.

Slowly, we made our way to the back of the room, where we found even more cardboard boxes. These boxes were brimming with files from bygone professors and classes. Among them were letters from professors requesting tenure. Perhaps Professor Stephens’ own vain appeal for tenure was somewhere among the hundreds of other petitions.

“It seems like the ideal place to remain if you are here in Pardee on Halloween night,” Parrish said, gently coaxing any timid spirits that might be lurking in the shadows. “We bring no harm, we just want to see you.”

Some students cajoled and called out into the darkness, hoping to induce some sort of ghostly activity. To my relief, nothing happened.

Long after my body had gone numb from the cold of the drafty attic, we finally dusted ourselves off and descended back down the stairs to the safety and warmth of the fourth floor.

Is the Pardee attic haunted? It’s hard to say; perhaps the fifth floor will forever remain a mystery. But one thing I do know is that I won’t be venturing back up to the fifth floor again any time soon.