It would seem on the surface that art and neuroscience are disciplines that share little common ground given the perceived differences in approach and practice. However, there are so many ways these fields are connected, so many interfaces for interaction, cross-disciplinary teaching and research. Art and science share a long history of similarity in process and in cross-fertilization of ideas that is not obvious in the current practice of each discipline. In addition, neuroscience and art can inform each other as they search for an understanding of brain processes, consciousness, creativity, and self. How artists create illusions of color, shape, depth and motion is based on the organization of our visual system that processes these visual attributes independently. Artists play with our object identification pathways, our emotions, and particularly our memories. We can construct objects and feelings from just a few strokes of an artist’s brush or a combination of colors. We also use different parts of our brain to create art depending on whether it is representational or abstract.

I have collaborated with a fellow professor, Ed Kerns to explore the intersections between the fields. The collaboration began as Kerns, and professional artist and architect Elizabeth Chapman, were immersed in a project looking at conservation of form at multiple levels of complexity, from the molecular to the planetary. Both artists have a long-term interests in biological form and neuroscience, working through metaphor to represent their ideas in their art. Conversations began on a regular basis, looking at metaphors involving the brain or mind as a city and communication through verbal and nonverbal processes.  These conversation were integral to the development of an exhibit entitled “Word Mind City; A Universal Resonance”, which was shown at Muhlenberg College during the fall semester 2007 and Lafayette College library during the spring semester 2008. For each location, panel discussions involving participants from each school discussed the common ideas and metaphors involved in the work and the connections between science and art. I wrote a piece for the show’s catalogue.  In addition, Chapman, Kerns and I developed the Art Neuroscience and Consciousness course described under my classes.

Most recently, I have interacted with Ed Kerns on his Octopus Meditation series and wrote a piece for the catalogue.

I have also interacted with Taney Roniger, a New York artist.  In 2017, I participated in Strange Attractors: Art Science and the Question of Convergence, a multiformat symposium sponsored by the Cue Foundation.  I was a speaker for the opening session and participated in online forums and a closing session. As part of this interaction, I was invited to submit an article to the Brooklyn Rail and to be part of the Strange Attractors exhibit the following year.

Perhaps my most important collaborations has been with my former student, Michael Hadley.  I met Mike at the start of his freshman year and I continued to be his advisor and research mentor. During his senior year, Mike took Art and Neuroscience, and although he has a masters in computational neuroscience from UC Berkeley, he also obtained an MFA from the School of the Art Institute of Chicago and is a practicing artist and professor of digital art at Columbia College in Chicago.

Saved  In collaboration with Michael Hadley ’10. 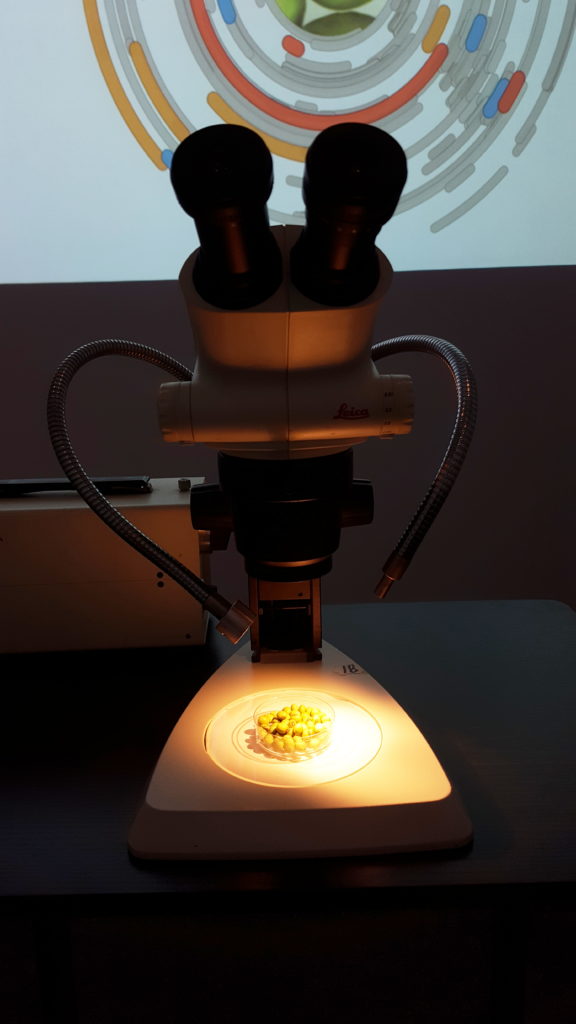 The Gratuitous Gram, In collaboration with Michael Hadley’10

Installation at the Easton Farmer’s Market, July 12 2014 and at the Lafayette STEAM camp July 2015. “Graphs of our Existence.” Catalogue essay for The Octopus Meditations by Ed Kerns, April 2018

Promise Foods, Installation at the School of the Art Institute of Chicago, April 24-May 15, 2015.

The Gratuitous Gram, Installation at the Easton Farmer’s Market, July 12 2014 and at the Lafayette STEAM camp July 2015.  In collaboration with Michael Hadley’10