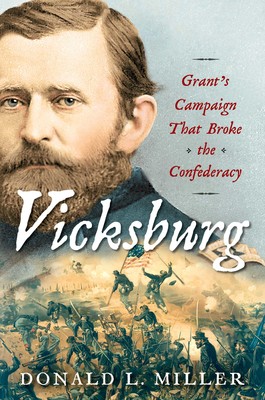 Vicksburg by Donald L. Miller is:

Winner of the Laney Prize

“When Vicksburg fell, the fate of the Confederacy was sealed.” – Ulysses S. Grant

“The war history of Vicksburg has more about it to interest the general reader than that of any other of the [Mississippi] river towns…Vicksburg…saw warfare in all its phases, both land and water – the siege, the mine, the assault, the repulse, the bombardment, sickness, captivity, famine.” – Mark Twain, Life on the Mississippi

Inspired by William Faulkner’s classic novel, Absalom! Absalom!, Donald L. Miller’s Vicksburg: Grant’s Campaign That Broke the Confederacy (on sale October 29, 2019) is an epic tale of the rise and fall of slavery and plantation culture in war-ravaged Mississippi. In little over three decades, pioneer families built a cotton and slave empire out of former Native tribal country and saw it utterly destroyed, at the peak of its economic influence, by the invading army of Ulysses S. Grant. Miller’s brilliantly written book, hailed by renowned historian James P. McPherson as “the fullest and best history of the Vicksburg campaign,” tells the dramatic and deeply researched story that has never been told in full until now. This is the astonishing tale of the longest and most decisive military campaign of the Civil War, which opened the Mississippi River, split the Confederacy, freed more than 100,000 slaves, sparked a social and racial revolution, and elevated Grant to command of all Union armies.

Although Gettysburg is often cited as the war’s most important battle, it was Vicksburg that sealed the fate of the Confederacy. Lincoln said that the war could not be won until Vicksburg was taken, as Vicksburg, Mississippi, was the last stronghold of the Confederacy on the Mississippi River. It prevented the Union from using the river for shipping between the Union-controlled Midwest and New Orleans and the Gulf of Mexico. The Union navy, under David Farragut, tried to take Vicksburg in the spring and summer of 1862, but rampant disease, powerful rebel river batteries, and tortuous terrain—Vicksburg sat atop high river bluffs and was surrounded by broken terrain and flooded swamps—allowed the Confederates to hold.  The following winter, General Grant moved his army south, through Tennessee and invaded northern Mississippi, assisted Admiral David Dixon Porter, head of the Union ironclad gunboat fleet on the Mississippi, but for five frustrating months Union forces failed to penetrate rebel defenses.  Grant tried and failed to build two canals, one of them over one hundred miles long, to allow his troop transports and gunboats to avoid the city’s river batteries, get south of them, and attack Vicksburg from dry ground.  In one of the most audacious moves of the war, opposed by the Lincoln administration, Grant also sent troops and gunboats into the guerilla infested Yazoo Delta, north of the Vicksburg, a howling, semi-tropical wilderness, where General William T. Sherman, Admiral Porter, and the precious gunboats the Union needed to take Vicksburg were nearly captured by rebel forces, and Grant very nearly lost his command. He persisted, nonetheless, and in the largest biggest American amphibious operation before D-Day, ran the gunboats by Vicksburg, ferried his army across the Mississippi, defeated two rebel armies in five successive battles, and bottled up the main rebel army inside Vicksburg. Then, in one of the oldest forms of warfare known—a siege–he bombarded and starved the city’s defenders, forcing them to surrender on July 4, 1863, one day after the Union victory at Gettysburg.

The victory split three Confederate states—Texas, Arkansas, and Louisiana—from the rest of the Confederacy, took an entire rebel army out of the war, and made the Mississippi, the commercial spinal cord of the country, once again, a Union river. But the real revelation of this book is that Vicksburg initiated a social revolution in the Mississippi Valley. With such a strong presence of Union troops on southern soil, more than 100,000 slaves fled to the Union lines. Over 21,000 of them joined the Federal army, and Grant created work for their families, cultivating cotton for wages on abandoned Confederate plantations guarded by black troops. Confederate President Jefferson Davis and his brother Joseph owned two of the plantations that Grant confiscated and attempted to turn into, in his words, a “Negro paradise.” It can be argued that Vicksburg was not only the turning point of the Civil War but also the real beginning of Reconstruction. And Grant, not Lincoln, was seen by many of those he liberated as the Great Emancipator.

This story has drama, characters, and significance to rival any war story in history: Lincoln, Sherman, Jefferson Davis, Confederate and Union soldiers, Union nurses and aid workers, spies, former slaves, and plantation masters and mistresses people it, in the style of a sprawling social novel.  Miller, an accomplished social historian, has drawn on original sources from over 40 archives to create a richly revealing portrait of the major players but most of all, of Ulysses S. Grant. In 1861 Grant was a washed-up veteran of the Mexican War, drummed out of the army for drinking. But in electrifying fashion he won a succession of major battles in the Mississippi River Valley at Forts Henry and Donelson and Shiloh on the Tennessee River, and eventually took Vicksburg, silencing his numerous critics in the Northern press and inside the Lincoln administration. Lincoln stuck with him, even after he was shown strong evidence that he was drinking, occasionally and excessively, while on duty. Today no general would ever be permitted to fail as often as Grant did, but when the city of Vicksburg fell, Lincoln said, “Grant is my man and I am his for the rest of this war.”

“A quarter of a million slaves lived in the lower Mississippi Valley when the Civil War broke out.  In Donald Miller’s Vicksburg, we learn not only the story of the war’s great western turning point, but how Ulysses S. Grant evolved into a military emancipator of most of those African Americans and therefore with time crushed the Confederacy.  Carefully researched and written with sizzling and persuasive prose, Miller has found the way to write both military and emancipation history in one profound package.  Never have headquarters, slave quarters, and the ultimate purpose of the war been so seamlessly and brilliantly demonstrated.”

“The fullest and best history of the Vicksburg campaign.”

“[Vicksburg] was the most satisfying Union campaign of the war, and Miller chronicles it with aplomb. An expert, detailed account that should remain the definitive account for quite some time.”

“This is a magnificent book, certainly one of the very best ever written about the Civil War. It has breadth and depth, and it is written in a way that makes the reader truly understand not only the battle and siege of Vicksburg, not only the Civil War, but war itself.”

“Readers will marvel at how Grant—a washed-up dry-goods clerk at the beginning of the Civil War—acquires the power and skill that made him the mastermind at Vicksburg of the largest amphibious army-navy operation staged by the U.S. military until D-Day. In a narrative taut with drama, Miller recounts how this resolute Union crusader takes the war down the Mississippi. . . . War history alive with probing intelligence and irresistible passion.”

“Miller deftly conjures the campaign’s uncertainty and drama—the surprises that lay around every bend of the region’s forbidding terrain and swampy waterways. At the heart of his story is U.S. Grant, who emerges here as a master of maneuver and improvisation, and a hero made human and real. This is military history at its best.”

– Elizabeth R. Varon, author of Armies of Deliverance: A New History of the Civil War

“This superbly written narrative is a portrait of America’s greatest soldier, warts and all, an accounting of Grant’s moral evolution on the slave question, of his many tactical gambles and errors, as well as his strategic triumph in the decisive campaign of America’s most important war.  We also meet ordinary soldiers, hear the iron dice roll, smell swamps and river lands that impede key logistics in the far-flung Western theater, feel the summer heat and thickly humid air. Most remarkably, we are guided up and down the Mississippi over the course of the greatest amphibious campaign of the 19th century.”

– Cathal J. Nolan, author of The Allure of Battle, winner of the 2018 Gilder Lehrman Prize for Military History

“Grant has had his biographers over the years, but in Miller he has finally found a writer who captures him in his completeness as a man and a military leader, overcoming heavy odds and repeated failures to win the decisive campaign of the war.”

“Miller provides important context for the final siege of Vicksburg by explaining why the city was vital to control of the Mississippi. . . . He superbly integrates events in Washington, keeping primary attention on those in the field of battle and emphasizing the role of freedmen in the victory. . . . Highly recommended.”

Vicksburg is available at