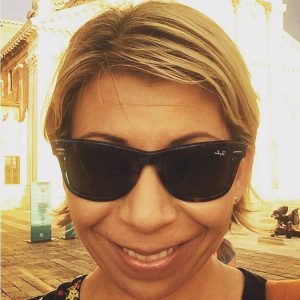 Rachel Goshgarian has served as McKelvy faculty advisor since AY2013-14. An Assistant Professor of History, her speciality lies in the the medieval Middle East.  At Lafayette College, she teaches a range of courses including: “The Crusades from the Perspectives of Byzantium, Europe and the Islamic World” and “The Middle East in the Mind of America, America in the Mind of the Middle East.”  She has won the Superior Teaching Award in the Humanities and Social Sciences (by student vote) twice, in AY2013-14 and AY2016-17.  Prof. Goshgarian conducts research on inter-faith interactions and urban self-governance in the medieval Middle East, is interested in the space and place of language in the Ottoman Empire, and also conducts research on Armenian cultural heritage in Turkey (through which she has worked with both the World Monuments Fund and UNDP).  She loves speaking and improving the languages she has studied — so, if you know Arabic, Armenian, French, Italian, Persian, Spanish or Turkish… please let her know!  She is also dedicated to ensuring that McKelvy provides an example for the entire Lafayette community as a place where constructive and productive dialogue can happen on a range of topics between interesting and creative minds.  Professor Goshgarian is grateful that McKelvy is such an interesting place — filled with students from a wide range of backgrounds (cultural, intellectual, personal) who are truly dedicated to creating an intellectual community based on mutual respect and boundless curiosity.