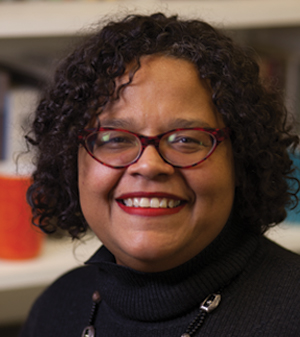 Kim F. Hall is the Lucyle Hook Chair of English and a Professor of Africana Studies at Barnard College where and teaches courses in Early Modern/ Renaissance Literature, Black Feminist Studies, Critical Race Theory and Food Studies. She is the author of Things of Darkness: Economies of Race and Gender in Early Modern England and Othello: Texts and Contexts. Professor Hall was the Barnard Library’s inaugural “Faculty Partner of the Year (2014) and 2015 winner of the College’s Tow Award for Innovative Pedagogy. This year Diverse Issues in Higher Education named her one of “25 Women Making a Difference in Higher Education and Beyond.” She is currently working on The Sweet Taste of Empire, which examines the interplay of gender, race and material culture in the seventeenth century Anglo-Caribbean sugar trade, and ‘Othello Was My Grandfather’: Shakespeare and Race in the African Diaspora for which she has received grants from the NEH, the National Humanities Center and the Schomburg Center for Research in African-American Culture.