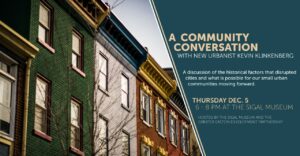 “21st Century Growth and Change in the Urban Cores of the Lehigh Valley: A Community Conversation”

America’s urban landscape is changing. In this Community Conversation, urban designer, architect, and planner Kevin Klinkenberg will facilitate a discussion of the historical factors that disrupted cities and what is possible for our small urban communities moving forward. The talk will be followed by a moderated panel discussion with Kevin, Pennsylvania State Representative Robert Freeman and others, as well as a community Q&A and dialogue.

Klinkenberg will look back at how Urban Renewal programs gutted our cities of much of their population and vibrancy (including the removal of Easton’s “Lebanese Town”), how cities continue to heal some of those wounds, and what smaller cities like Allentown, Bethlehem, and Easton can do to make the most of this current period of re-invention.

“I want to give people a sense of the big picture, and why changes are happening,” says Klinkenberg. “If you understand and prepare for future change, you’ll be able to take the most advantage in your own community.”

A particular focus of the talk will be today’s changing economy, generational shifts and trends, and targeted practical steps that can be taken to revitalize our urban cores. According to Representative Freeman, Klinkenberg’s wide-ranging experience will help guide the audience to “think on what small cities need to do to succeed and be sustainable, while creating a strong, connected sense of community.”

This program is sponsored by the Lehigh Valley Engaged Humanities Consortium, with generous support provided by a grant to Lafayette College from the Andrew W. Mellon Foundation.

Urban designer, architect, planner, zoning wonk, and redeveloper, Kevin Klinkenberg has just returned to Kansas City from Savannah, Georgia, having recently completed a four-year stint as Executive Director of the Savannah Development and Renewal Authority. In 2018, Kevin & SDRA led the first new master plan for downtown Savannah in decades, timed to coincide with the city’s tricentennial in 2033. While in Savannah, he also published his first book, Why I Walk: Taking a Step in the Right Direction.

Kevin currently operates K2 Urban Design, and previously co-founded 180 Urban Design & Architecture in Kansas City. He’s worked with clients in nearly all of the continental 48 states, in the private, public and not-for-profit sectors. Kevin has been a regular speaker on design and planning issues for more than two decades and stays focused on place-making through his blog “The Messy City.”

He is also a past President of AIA-Kansas City and a founder of the Urban Society of Kansas City. For the past twenty-five years, he has focused his energies on those who aim for successful walkable and sociable places that make people’s lives healthier, wealthier and happier.