Our project, to create paired classes in audio and video storytelling in order to equip students to listen to, record interviews with, and, ultimately, tell the stories of women in the Lehigh Valley was, we think, a great success, especially for its first offering.

We focused the initial courses on interviewing Latina women and ended up producing the stories of fourteen individuals, including seven Cedar Crest students, two Cedar Crest staff members, a grandmother of one of our students, and four members of the larger Lehigh Valley community. Our community participants included a community relations and health promotions specialist, a realtor, a radio broadcaster and producer, and the Senior Deputy District Attorney in Lehigh County’s special victims unit (she recently won the primary election for Lehigh County judge). The Latina women participating in our project reflected the diverse heritage of the Latinx population in the Valley: Puerto Rican, Dominican, Columbian, Mexican, Honduran, Venezuelan. 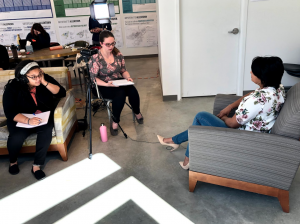 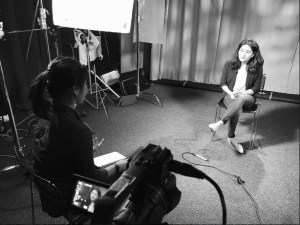 Our students learned not only about cultures, histories, hopes, and achievements that many were not aware of before taking the course, but about how to listen carefully and attempt to truly “see” individuals and represent them through audio and video documentary productions. Beyond the acquisition of technical skills, students gained a deeper appreciation of the challenges faced and courage displayed by the women we interviewed. The stories produced attest to the difficulties of pursuing higher education as a Latina; the sense of being torn between respect for traditional cultural values for women and a desire for independence and personal achievement; the frustration of being the target of assumptions about who a Latina should be—including the assumption that she should speak Spanish—and the feeling of pride in their successes, whether those successes are personal triumph over tragedy, professional contributions to the community, or a positive influence on their own children. 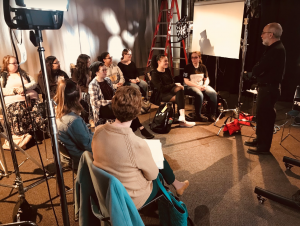 Our courses were designed to provide instruction, practice, and feedback in the use of Audacity (for audio stories), as well as tutorial support for a range of video production platforms. Students had the opportunity to work with the Communication Department’s technical assistant on camera use and video techniques, as well as on editing. A senior New Media and English major also worked with students as a teaching assistant: she provided invaluable one-on-one support as students developed their story arcs from interviews and honed their production skills. Accompanying the technical instruction were classes on Latinx history and culture, which included readings and video documentaries, as well as discussions of other model audio and video projects found online. Students met most interviewees during class sessions; however, we also took the class to the Vision 2030 Community Engagement Hub in downtown Allentown in order to meet and interview several community members. 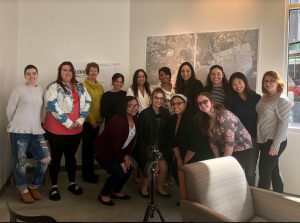 At the end of the semester, we created an exhibit of stories produced by our students, “Estoy Aquí/I Am Here.” We invited all interviewees and the larger Cedar Crest and local community to the April 29th exhibit and accompanying reception through emails, posters, word of mouth, and a Facebook event which reached 2600 people; 250 people interacted with the Facebook event page. On the day of the reception, more than 50 people attended the reception, including all community interviewees. Our students were thrilled at the success of their projects: they had the opportunity to watch the individuals they interviewed be moved by the stories the students told, using the interviewees’ own words. We are providing copies of the stories from the exhibit to the Lehigh Valley Engaged Humanities Coalition for inclusion in its project archive.

The faculty members were thrilled with the result of the sponsored project and hope to teach these classes again—especially since so many Cedar Crest students heard from members of our classes about the value of the courses and the work we produced together, and want to take the courses. We have learned much about pacing and organization of the class and making arrangements for interviews which we’ll put to good use in future versions of the classes. Almost from the first week in talking with students, we knew we’d want to run this course again. So many themes and narratives emerged from the interviews that we’d like to explore further and that resonate with our students’ lives, many of whom are first-generation students themselves. Beyond offering a version of this course again, Dr. Fletcher plans to incorporate a unit on telling stories into her Freshman Seminar class and possibly into College Writing classes as an assignment.