On Wednesday May 9, 2018 at the Multicultural center at Muhlenberg College, our class, DOC 370: Documentary Capstone, hosted an exhibition of documentary works produced in this, the course’s inaugural year. DOC 370 is the culminating class in the LVAIC Documentary Storymaking Minor, a nascent, five-course minor organized and administered by three Lehigh Valley institutions: Lehigh, Lafayette, and Muhlenberg. 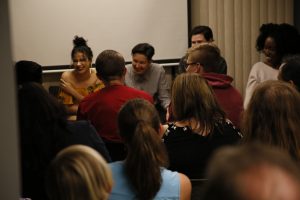 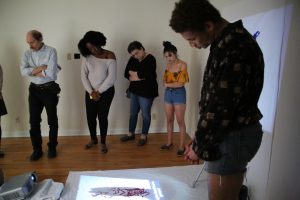 In line with DOC 370’s aim to “support the multi-modal expression of ideas,” the exhibit included a wide range of documentary modes: linear films that blend poetic, personal, and expository modes; a multi-channel video installation; interactive web stories; and the most prominent documentary mode of all: lasting relationships of trust, vulnerability, and mutual exchange. The topics taken up in the projects were as varied as the shape of the projects: the expansive nature of queer identities and the failure of our linguistic systems to hold that expanse; the intimate effects of opioid addiction or whiteness on families; living as a dutiful child in between cultures and ways of being; and the role of Lehigh University in changing Bethlehem’s long-standing communities and neighborhoods. 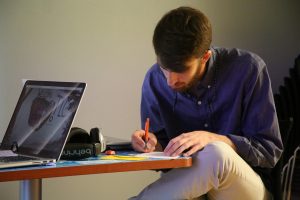 Over the course of the semester, the seven students in the class, the majority of whom are graduating / graduated seniors, applied documentary theories and practices to investigate what plagued them, what haunted them, what intrigued them. To do this work, they had to be willing to confront their own histories, their own privileges, their own fears. And they had to be willing to do it publicly, in the community of the class and later, before an audience that would include family members, peers, professors, and colleagues from throughout the Lehigh Valley.

I think there are many factors that prepared students for this work. They have been forging community throughout the five-course documentary minor in classes that marry technique, theory, and personal development. I also witnessed significant bonds form among the students during their four days as participants in the 2018 Full Frame Documentary Festival Fellows program. For many students, this was their first-ever documentary film festival. Over the four days, students were able to watch a wide-ranging slate of films that both did and did not meet their expectations for documentary practices. Throughout it all, they discussed their experiences, connected it to what we were learning in the classroom, and importantly, applied what they were seeing and feeling to developing their own ideas. Over late night dinners and ice cream stops, the community of the classroom became even more fortified, even more available to do the work of supporting each other’s visions.

Over dinner after the exhibition, a parent of one of the exhibiting artists asked, “Is every class like this? So diverse and so engaged?” Certainly, we can’t claim singularity, but we can perhaps claim that there is something special forged in those documentary arts classes which take as their center the forging of ethical, productive, and expressive relationships in telling stories that are at once socially and personally meaningful.