Skip to content
Although Lafayette College’s wrestling club has been open since it’s inception in 1989 we have never had any women who have wanted to wrestler. This fall, three women in the class of 2020 approached the club requesting that we begin a women’s program. The club
h 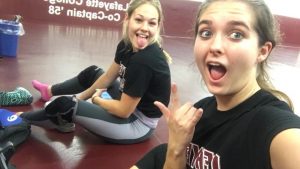 as embraced this request and has joined the NCWA and WCWA organizations, currently, we have three girls in our wrestling and fitness club, of the three two are working out with the club. These two individuals are Hannah Koch and Skylar Grote. While Hannah is a novice, Skylar is an accomplished freestyler. She is a four-time Fargo All-American and a champion in 2015 and a two-time Pan-American champion.
Now the Lafayette Wrestling Club is beginning a comprehensive women’s recruiting to match the men’s. The goal is to have a full women’s lineup by the 2018-2019 season.