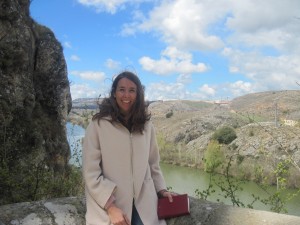 This is a picture of me in front of el Río Duero in Soria, Spain, home of one of my favorite Spanish poets, Antonio Machado.

I joined the Lafayette College Foreign Languages and Literatures Department in 2013 after graduating with a PhD in Spanish Literature from the University of California, Davis. My research is primarily concerned with the negotiating relationships between the past and the present.  My book, titled Narrating War in Peace: The Spanish Civil War in the Transition and Today (Palgrave 2015)  identifies and analyzes several prominent shifts in the way the Spanish Civil War is narrated in Spanish cultural production in the last 35 years.  I started studying Spanish in High School, and since have lived in Barcelona, Madrid, and Medellin (Colombia). I decided to pursue a career as a College Spanish Professor because I am passionate about equipping students to communicate in, understand and navigate cross-cultural and intercultural experiences. I specialize in 20th and 21st century Peninsular literature and film, but am also interested in the larger themes of political transitions, justice, and memory in Latin American literature and film.