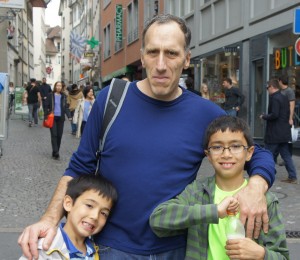 Welcome to my corner of the web. That is me on the right in the middle.   I am currently an Associate Professor in the Chemistry Department at Lafayette College.  I joined the faculty here in 2004.

I earned my undergraduate degrees from Tufts University in 1988.   My BA was in Soviet-Eastern European Studies which, believe it or not, was an important major in 1988.  Who would have guessed that the Soviet Union would become no more in such a short time?   Luckily, I also earned a BS in engineering specializing in chemical engineering.  I  taught physics and chemistry  for five years at Phillips Academy in Andover, MA before I entered graduate school in the department of chemistry at Dartmouth in 1993.  Five years later I earned my PhD in Physical Chemistry having worked with Chuck Braun and Sergei Smirnov.  I went back to teaching chemistry but this time at Phillips Exeter (confusing , I know.) Academy in 1998, but I only stayed there for two years.   In 2000, I was awarded the Camille and Henry Dreyfus Postdoctoral Fellowship in Environmental Chemistry at Yale University.  My time at Yale was split between two different advisors, Gabe Benoit in Yale’s Environment School and Meny Elimelech in Yale’s Environmental Engineering Program in the Department of Chemical Engineering.  I came to Lafayette from Yale in 2004.

So, what does that make me?  I am still a physical chemist, but the areas that I focus my research have a decidedly environmental bent.