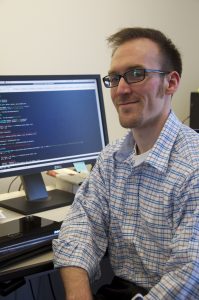 DSS recently welcomed James Griffin as the new co-Director for Research and Development.  James joined DSS in the position of Digital Library Developer in 2012, and the team at Skillman is thrilled that James agreed to step into this new role.  Motivated by an interest in digital preservation and scholarly communication, James is deeply involved in the application of open source technologies within libraries and archives.  James’s research interests focus on the semantic web.  He aspires to expand the usage of linked data beyond the domains of digital preservation and curation.  He is also intrigued by the potential for Development and Operations (DevOps) service management methodologies to increase durability and performance in technical infrastructure.

Since joining DSS, James has worked on implementing Islandora, an open-source digital asset management framework.  He has also collaborated with faculty on the Swift Poems Project, the East Asia Image Collection, and the Easton Library Company Database Project.  Since 2015, James has been exploring how linked open data may be further integrated within the digital repository architecture for DSS.  He is Skillman Library’s liaison to the Project Hydra community.  In his new co-Director role, James will continue to collaborate on faculty projects and lead the migration of DSS digital assets to the Hydra repository solution.  James is excited to execute a vision for DSS anchored in the values of open-source collaboration and digital library preservation.  Congratulations, James!