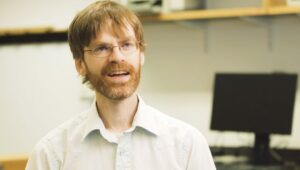 Thomas explains, “One of the triumphs of contemporary physics is that we now have a very consistent picture of the fundamental particles that make up normal, atomic matter and the forces through which these particles interact—a picture which has become known as the Standard Model of particle physics. However, there is a lot of evidence (mostly from astrophysical observations) that our universe also contains other kinds of particles as well—particles that are ‘dark’ in the sense that they interact only very weakly with the more familiar particles of the Standard Model.

“Does such a panoply of dark particles really exist in nature?  Do they really interact with visible particles through such a mediator?  We don’t know, but we’d like to find out.  Our goal in this paper was to determine whether these decay cascades could potentially be detected at the Large Hadron Collider (LHC), the particle-physics experiment in Switzerland at which the Higgs boson was recently discovered.  We showed that indeed, in many cases, these signals would not have been observed at the LHC thus far, but would be within reach in the future as the LHC accumulates more and more data. This is exciting since it means that there could potentially be new discoveries beyond the Higgs boson still awaiting us at the LHC.”