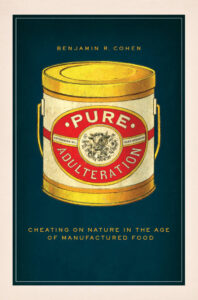 In the latter nineteenth century, extraordinary changes in food and agriculture gave rise to new tensions in the ways people understood, obtained, trusted, and ate their food. This was the Era of Adulteration, and its concerns have carried forward to today: How could you tell the food you bought was the food you thought you bought? Could something manufactured still be pure? Is it okay to manipulate nature far enough to produce new foods but not so far that you question its safety and health? How do you know where the line is? And who decides?

In Pure Adulteration, Benjamin R. Cohen uses the pure food crusades to provide a captivating window onto the origins of manufactured foods and the perceived problems they wrought. Cohen follows farmers, manufacturers, grocers, hucksters, housewives, politicians, and scientific analysts as they struggled to demarcate and patrol the ever-contingent, always contested border between purity and adulteration, and as, at the end of the nineteenth century, the very notion of a pure food changed.

In the end, there is (and was) no natural, prehuman distinction between pure and adulterated to uncover and enforce; we have to decide. Today’s world is different from that of our nineteenth-century forebears in many ways, but the challenge of policing the difference between acceptable and unacceptable practices remains central to daily decisions about the foods we eat, how we produce them, and what choices we make when buying them.