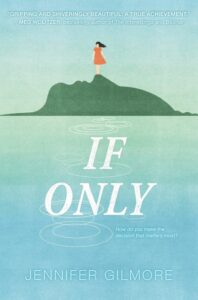 Acclaimed novelist Jennifer Gilmore’s intimate and achingly beautiful novel offers a probing look at teen pregnancy and adoption from multiple perspectives, deftly exploring the role that chance and choice play in shaping the lives of two teenagers who are separated by 16 years but whose stories are intertwined.

In a starred review of If Only, Kirkus describes how Gilmore fashions two first-person narratives. “Bridget, a pregnant 16-year-old grappling with whether to keep her baby at the turn of the 21st century, and Ivy, a 16-year-old adoptee, who in 2017 decides the time to find her birth mother has come. Early on, Gilmore slowly reveals that Ivy is the daughter Bridget gave to lesbian couple Andrea and Joanne in 2000, exiting their lives shortly thereafter, leaving only letters for Ivy. While the intricately interwoven nonlinear narrative offers much food for thought in terms of identity formation and reflects a concerted effort to present characters from a variety of diverse backgrounds, the novel excels in diving head-on into the deep moral and existential quandaries unplanned pregnancy and adoption present. On the one hand, Bridget expresses the view that ‘adoption is always the story of someone breaking someone else’s heart” just as Ivy tries to reconcile feeling fortunate—“I am the prize. I have never not felt that way”—with wondering “Why did she hand me over in the end? What did I do that was so bad?”

The New York Times calls Gilmore’s writing “emotionally raw yet beautiful, touching upon some traditional Y.A. themes (adoption, teen pregnancy) with an almost mystical feel. But the heart of the story — how the decisions and connections we make inexorably touch others’ lives — will echo and seep into readers’ bones long after the last page.”