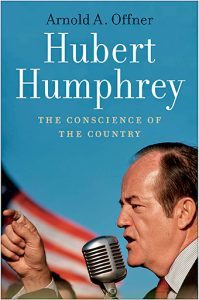 Cornelia F. Hugel Professor Emeritus of History Arnold Offner attempts to restore the oft-maligned former vice president and senator to the pantheon of great American statesmen. Offner was drawn to Humphrey as a strong advocate of the Roosevelt-Truman liberal tradition.

“Humphrey was the most liberal, and most successful, legislator of the 20th century,” he says.

Humphrey, a political giant of his era, has been largely forgotten. Offner’s book, the first biography of him since 1984, recaptures the man’s political life and achievements. Based on exhaustive research, it explains his critical role in masterminding through the Senate and into law the first nuclear arms limitation treaty in 1963 and the historic 1964 Civil Rights Act. The book also sheds new light on how President Lyndon Johnson undermined Humphrey’s campaign for the presidency in 1968 against Richard Nixon because Johnson favored the Republican’s more hawkish views on the Vietnam War.

The book was published this year by Yale University Press.