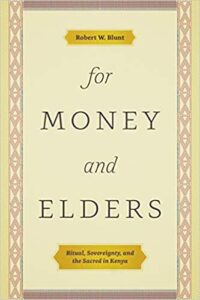 Many observers of Kenya’s complicated history see causes for concern, from the use of public office for private gain to a constitutional structure historically lopsided towards the executive branch. Yet efforts from critics and academics to diagnose the country’s problems do not often consider what these fiscal and political issues mean to ordinary Kenyans. How do Kenyans express their own political understanding, make sense of governance, and articulate what they expect from their leaders?

In For Money and Elders, Blunt addresses these questions by turning to the political, economic, and religious signs in circulation in Kenya today. He examines how Kenyans attempt to make sense of political instability caused by the uncertainty of authority behind everything from currency to title deeds. When the symbolic order of a society is up for grabs, he shows, violence may seem like an expedient way to enforce the authority of signs. Drawing on fertile concepts of sovereignty, elderhood, counterfeiting, acephaly, and more, Blunt explores phenomena as diverse as the destabilization of ritual “oaths,” public anxieties about Satanism with the advent of democratic reform, and mistrust of official signs. The result is a fascinating glimpse into Kenya’s past and present and a penetrating reflection on meanings of violence in African politics.