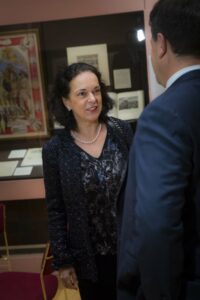 Duhl explains: “The name ‘Verrazzano’ was not given to the famous bridge by accident. It commemorates a humanist navigator from Florence, Giovanni da Verrazzano (1485-1528), who in 1524 was commissioned by King Francis I to find a new route to China north in order to compete against Portugal and Spain, the two powers that dominated maritime trade then. Instead of China, however, Verrazzano came across a vast territory situated on the Atlantic coast of the Northern American continent, the exploration of which he encapsulated in a letter addressed to the king.

“This inestimable document represents the first known written account providing a detailed but idealized utopian description of the places and the populations encountered by the Florentine’s crew. Among the few preserved copies of the letter, the “Cèllere manuscript,” which is housed at the Pierpont Morgan Library, New York, is particularly valuable because it contains several added notes describing places, notably the New York Bay area named after prominent members of the royal family and its entourage. These include François d’Angoulême (King Francis I), his mother Louise, and his sister, Marguerite, Duchess of Angoulême and Queen of Navarre.

“The annotations are indicative of the writer’s concern for grounding the utopian narrative in the socio-political and financial climate of the years 1522-1525, during which the king developed new financial ties with Italy. Based on a multidisciplinary approach, which includes historical, textual, literary, and linguistic data, this study examines the political motivation and implications of Verrazzano’s expedition as an early-modern example of globalism.”

One Response to "Arcadia, Angoulême, and the New World"