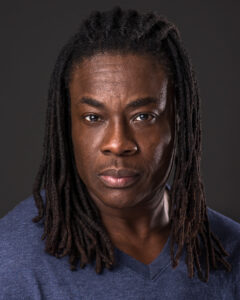 Skyler Cooper is a San Francisco-based writer, producer, director, actor, and activist. Cooper began his career as a performer in classical and contemporary theater. In 2013 he wrote, produced, directed, and starred in the award-winning short film Hero Mars, which continues to be used by high schools and colleges, as well as other groups to promote trans-awareness. Cooper is a highly regarded performer in the LGBTQ community and is notable for his canon of work portraying both male and female characters. In June 2019, he made headlines in the San Francisco Chronicle by becoming the first transgender man in the history of classical theater cast to play Othello, a role that he had played as a woman in 2004. When Cooper is not on stage, he can be found doing presentations for corporations on “How to be an Ally” to black and transgender workers. Cooper most recently performed his One Man Show at the Marshstream International Solo show, receiving an honorable mention. Currently Cooper is directing and producing a short film he wrote titled Worthy of Survival.