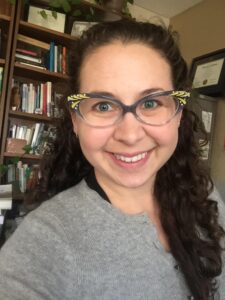 Simone Chess (she/her) is an associate professor of English and director of the Gender, Sexuality, and Women’s Studies Program at Wayne State University in Detroit. She is the author of Male-to-Female Crossdressing in Early Modern English Literature: Gender, Performance, and Queer Relations (Routledge, 2016) and coeditor, with Colby Gordon and Will Fisher, of a special issue on “Early Modern Trans Studies” for the Journal for Early Modern Cultural Studies. Chess is currently working on two new book projects, one on Shakespeare and trans culture for the Routledge “Spotlight on Shakespeare” series and another focused on early modern disability, queerness and adaptive technologies.