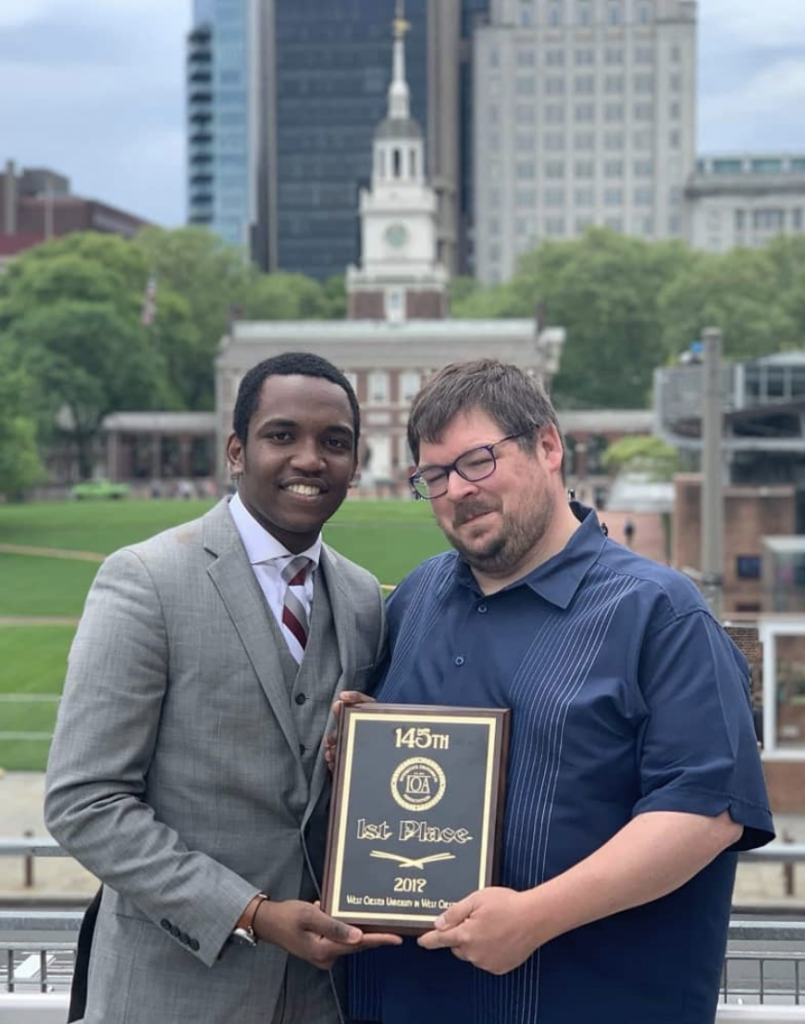 IOA is the longest running public speaking competition in North America. The first tournament was first held in 1874 in Galesburg, IL and has been held without interruption every year since. Two students are selected by each state to participate. In 2019, the representatives from the Commonwealth of Pennsylvania were both students from Lafayette College (Saeed Malami and first-year Lia Charles). They attended the tournament this past weekend (April 27-28). Coincidentally, the tournament was held this year in Philadelphia, PA.

Against the best competitors from each state, Saeed finished in the top 12 that advanced to a semi-final round. He advanced to the finals, which was held in the Independence Visitor Center overlooking the Liberty Bell and Independence Hall. In the final round, Saeed gave a stunning performance and the judges crowned Saeed Malami as the 145th Interstate Oratorical Association’s national champion.

Attending this prestigious competition is an honor. Lafayette has a long history of representing Pennsylvania at this tournament. We have placed students in the semi-final round, but Saeed is Lafayette’s first finalist and is our first champion (and only the second from Pennsylvania). Past IOA competitors include William Jennings Bryan, Senator Robert LaFollette, and Senator George McGovern. Saeed’s championship broke barriers in the forensics community. He is the first Nigerian and is likely the first non-US citizen to win the competition. As his coach, I’ve seen firsthand the deep dedication he has given to this performance. His speech on child slavery within the chocolate industry has been a passion project rooted in academics and a personal connection to the topic as a West African.

Founded in the fall of 1998, the team has grown from humble beginnings and now has 15-20 students and has two full-time coaches. The team travels a competitive regional and national schedule throughout both semesters, culminating in a trip to the national tournament each April.

The students on the team participate in a wide variety of activities on campus and are from diverse academic backgrounds.